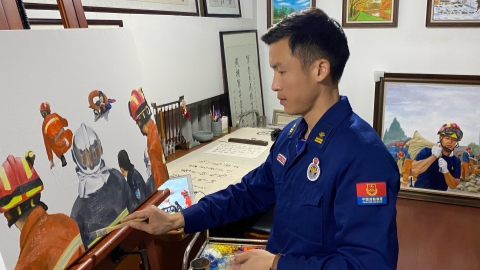 He Shujun creates an oil painting at the workshop, featuring his teammates rescuing a resident trapped in a snowstorm in Jiading in 2008. 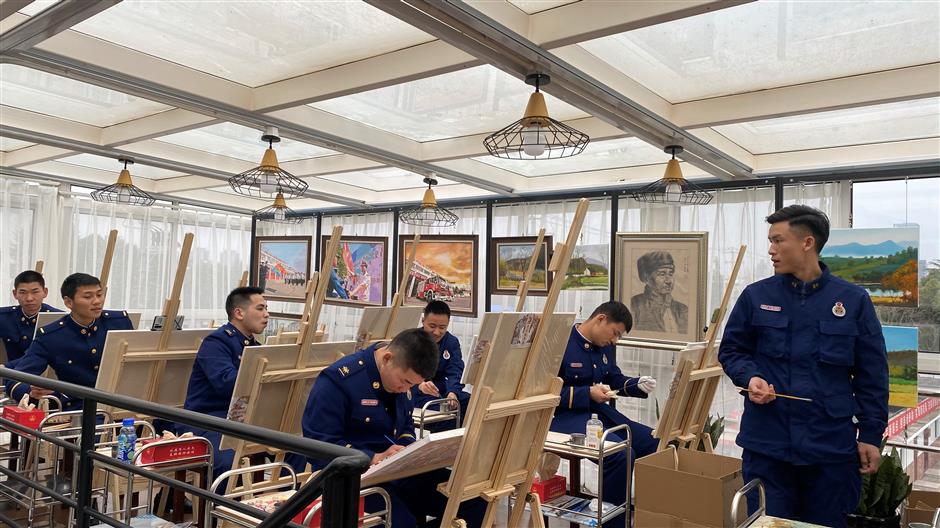 He teaches his colleagues oil painting in a newly launched studio with finished artworks hanging in the window.

To mark National Fire Prevention Day, which falls on November 9 every year, an exhibition of oil paintings depicting the daily life of firefighters is displayed at the Wo Jia Shu Fang Anting Pavilion. Each painting vividly depicts how firefighters fight fire and brave danger, earning praise from visitors.

The reason the paintings are so realistic is that the painter, He Shujun, is a firefighter himself, working as an acting chief assistant at the Jiading Chengnan Fire and Rescue Brigade.

Born in Guizhou Province, southwest China, he showed great talent for painting as a child. He started copying the illustrations in textbooks in elementary school and gained an unexpected little fame.

“I remembered that we were going to take an open class on Dr. Norman Bethune in sixth grade, and the teacher gave me a pen and a large piece of paper to draw his picture,” He recalled.

However, his interest could not develop further due to his family’s meager income, and he decided to join the military, working at the Jiading branch of the Shanghai Fire and Rescue Brigade in 2008 for help improve the living conditions of his family. It’s been 13 years now.

“Honestly, I didn’t feel hard during training. I’m a firefighter. You’re not allowed to relax mentally or physically, otherwise you’ll be lost in real danger,” He said, attributing his quick adaptation to his poor living conditions which helped him endure hardship and work hard.

Even as a firefighter, he didn’t want to stop creating, so he bought several books, took online classes, and stayed in a basement to paint when there was no rescue or emergency task. training at night.

One day, one of its leaders noticed its work and considered it an encouragement and an inspiration to other members. A workshop was therefore launched on May 20 this year, which also provides him with a better environment to paint.

His colleagues with no painting experience are also willing to give it a try. For those green hands, he prepares “paint by numbers” kits to get started so they can get familiar with the colors, cultivating their interest. He also shares his thoughts with them as he also started the learning process from scratch.

Now there are more than 100 paintings in the workshop. 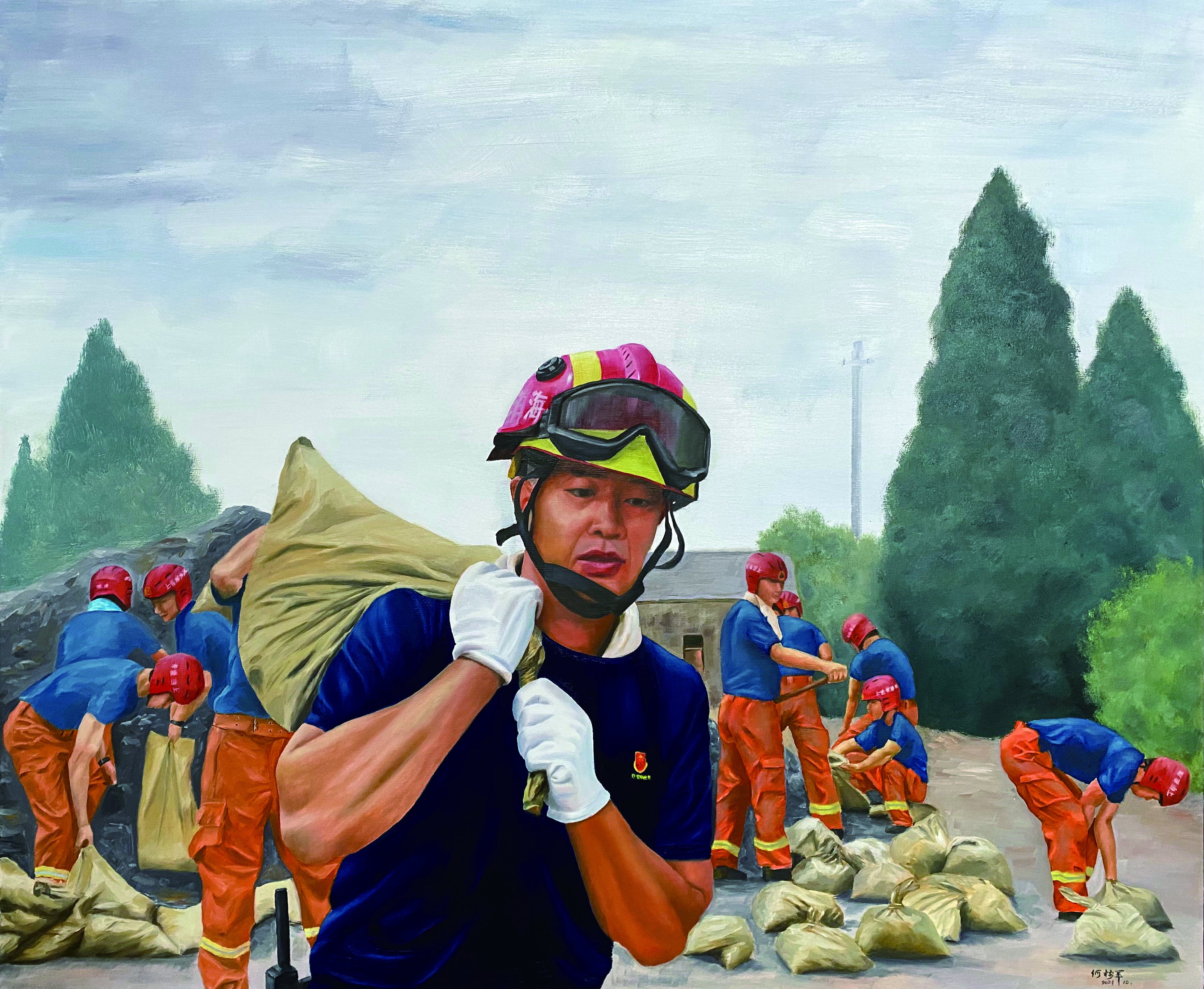 “I feel thrilled to see them immersed in painting on canvas when they are free. I think I have set a good example of the ‘practice makes perfect’ mindset,” He said. “Our work has always been under great pressure since we are faced with life and death. Painting therefore also offers a way to release pressure, pass the lazy hours and enrich our boring lives, because the fire station is our home.”

For He, painting and training are similar. Firefighters summarize each training at the end to facilitate improvement. Likewise, he summarizes his art teaching sessions to improve the painting skills of his colleagues and himself.

One of the highlights is a painting of his teammates carrying supplies to fight a flood and provide relief in Anhui province last year. It aims to capture the meaningful moments of their daily work to spread the spirit of not being afraid of difficulties.

Security awareness is another task He focuses on. As the fire station covers the Jiading Industrial Park which attracts companies to set up their factories inside, promoting safety awareness is of great importance. Fire drills, such as rescuing trapped people, and briefings on basic fire safety knowledge, such as how to use a fire extinguisher, are also key to preventing fires.

In films such as Fireproof, Only the Brave and Ladder 49, audiences may only see brawny firefighters, but an intelligent mind that can solve problems in a short time is another essential quality of firefighters in the real world. , because unexpected things often happen. .

“Once when I arrived at the scene of the fire and started to assess the situation, a wall suddenly collapsed, almost hitting me. I was lucky to avoid it, but I didn’t feel scared, or you can say I didn’t have time to be scared, He said. “Our routine training includes simulation of the fire trend and route analysis of the fires, so you won’t panic. It’s not an easy job, but I like it.”

More and more university graduates accept to be firefighters despite the danger and the difficulty. For him, it’s a good thing. Their minds work faster and can formulate more appropriate plans thanks to their professional knowledge, which is a great advantage for rescue efforts, he said.

“To be honest, this career is the best way to strengthen one’s mind with logical thinking, and it’s also the secret of the workshop’s success,” He said with a big smile.