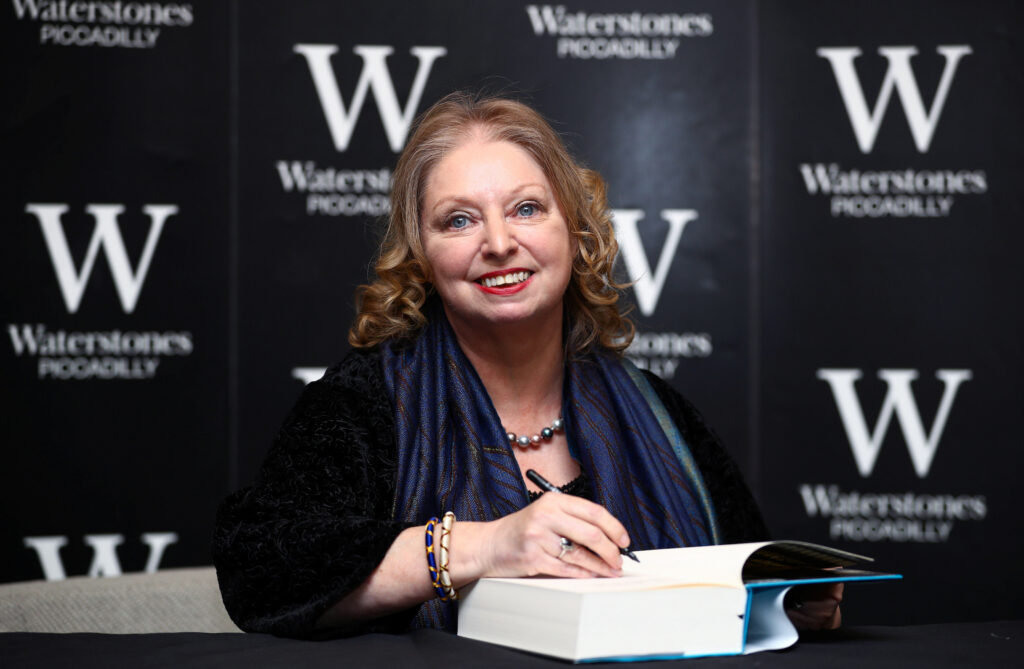 Judy Woodruff: Hilary Mantel is the author of 17 books, but it’s her trilogy of historical fiction based on the lives of Thomas Cromwell and King Henry VIII of England that brought her worldwide fame and acclaim.

Mantel died yesterday aged 70 of a stroke in a hospital near her home in Exeter, England.

The “NewsHour”‘s Jeffrey Brown sat down with Mantel in 2015. At the time, she had published the first two novels in the trilogy, “Wolf Hall” and “Bring Up the Bodies.” The first was adapted for both a PBS television series and the Broadway stage.

Here is an excerpt from their conversation. It is part of our arts and culture series, Canvas.

Hilary Mantel: With his six wives. No one else has a ruler with six wives, who cut off the heads of two of them. So you’re off to a good start there.

Jeffrey Brown: Mantel’s novels “Wolf Hall” and its sequel, “Bring Up the Bodies”, have caused a worldwide sensation, with more than four million books sold in 37 languages. She has won the prestigious Man Booker Prize twice, a first for a woman.

It’s a familiar story in many ways, the momentous reign in the 1500s of Tudor King Henry, played on TV by Damian Lewis, basking in power but needing a male heir, freeing a female in favor of young Anne Boleyn, only to have her head cut off when no son is produced.

But Hilary Mantel told the story in a new way, casting Thomas Cromwell, played by Mark Rylance, in the lead role. Cromwell has long been considered a clumsy and cruel schemer, especially compared to his great rival, Thomas More. Mantel’s Cromwell is certainly smart and intriguing, but he’s also charming and courteous.

Hilary Mantel: Thomas Cromwell, son of a blacksmith, who became the King’s right-hand man and eventually Earl of Essex.

And my question is simple: how do you do that? What kind of man in this hierarchical and structured society can break through all the social strata, all the factors stacked against him, and climb so high? And what is the price?

Jeffrey Brown: You looked at the story and you said, it’s wrong, the way he was portrayed?

Hilary Mantel: I thought it was much more complicated and nuanced than the popular image of Cromwell. I wanted to put the spotlight on him. And I wanted to ask my reader, or our audience, well, what would you do if you were him? Just walk a mile in his shoes, and then see what you think.

Jeffrey Brown: Mantel says she based her fiction on years of research.

Hilary Mantel: I think an imaginative writer for the scene or the novel has a — always has a responsibility to his reader, and that responsibility is to get the story right.

Jeffrey Brown: Want to do this?

Hilary Mantel: Absolutely. It is the absolute foundation of what I do.

I start imagining to the point where the facts run out. But, as a historian, I work on the great swampy terrain of interpretation.

Jeffrey Brown: Who are the historians, but also, you say, the novelists?

I sometimes think back, though, to the day I started, because it’s very vivid in my mind, writing the first paragraph, and having this feeling, by the time I was halfway through the first page, it’s the best thing you’ve ever done. I walked around with a big smile: Do you want to see my first page?

Judy Woodruff: From this first page to the very last, Hilary Mantel completed her famous trilogy in 2020 with the novel “The Mirror and the Light”.

Electrification of oil and gas platforms with wave energy