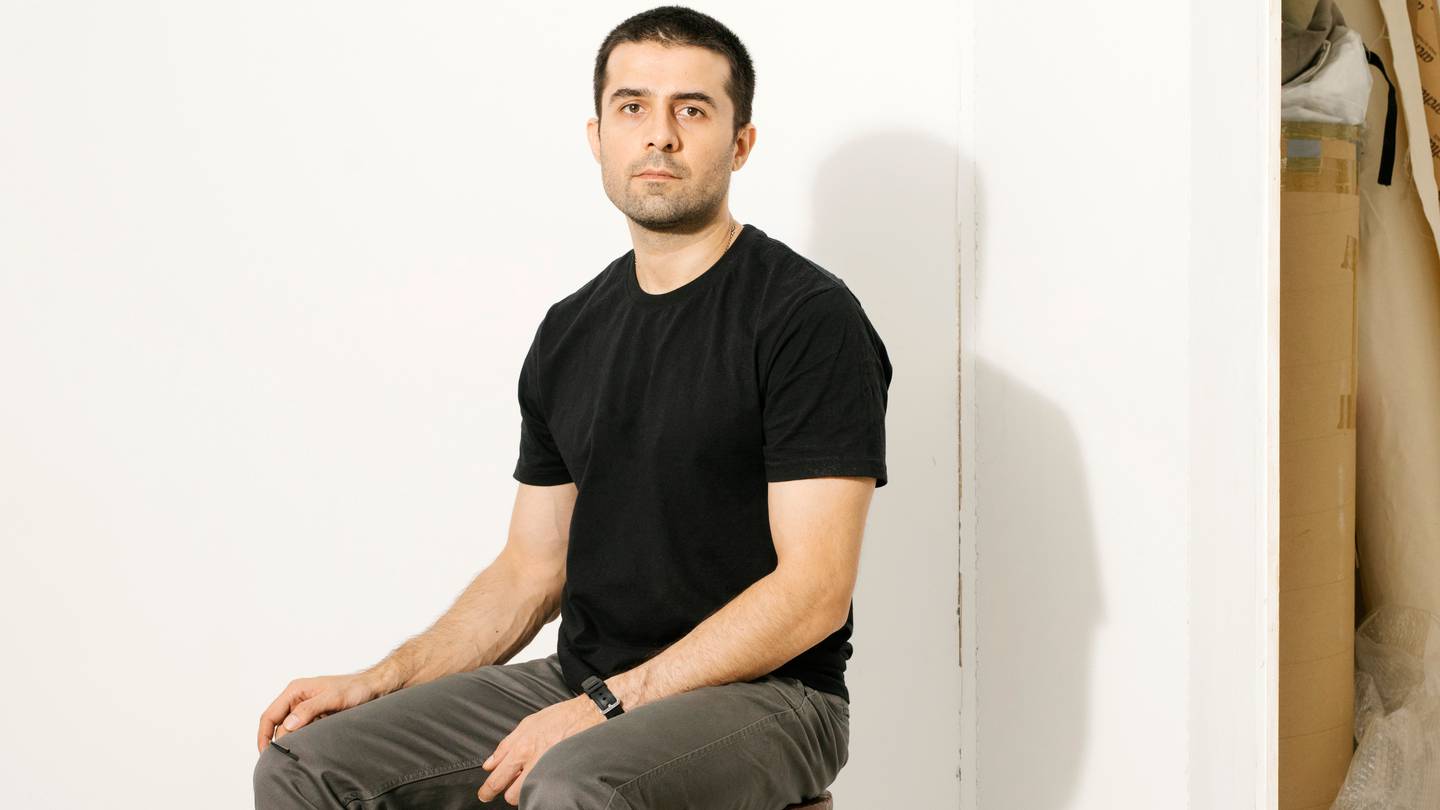 By retracing the work of Fahd Burki, one could recognize a slow abandonment to the void. Over the past decade, the artist has dismantled the characters and protagonists of his early figurative works, which contain surreal comic-inspired scenes, to arrive at minimalist, abstract creations that challenge the formal notions of painting. .

This gradual and precise change can be seen in the more than 50 works gathered at the Jameel Arts Center for Burki’s first mid-career survey. Titled Daydreams, the exhibition brings together paintings, works on paper and sculptures made over the past 15 years, and runs from Saturday to October 9. The exhibition also features commissioned pieces, including four reliefs, a form Burki has been exploring since 2020, and a painting.

Divided into three galleries, the works are not classified chronologically but traced to retrace how the artist oscillated between figuration and abstraction over the years.

“With an exhibition like this, you start to select works that are essential to the practice, that basically had a big influence on the work that followed. So the challenge was to identify them,” says Burki. “I always keep an eye on what I’ve done in the past. I am very aware of its evolution.

His early paintings, from his time as a young artist at the National College of Arts in Lahore, from which he graduated in 2003, are filled with strange machines and unusual figures that indicate an ongoing narrative. An untitled painting from 2004 depicts a nightmarish scene – a desert landscape where a half-man, half-ram gestures towards a couple, the one-eyed burqa-clad woman clutching cotton candy.

Burki, who lives and works in Lahore, credits these creations to his childhood fascination with comics and graphic novels. Growing up, her interest in books was more for the visuals than the text. “My grandparents had a lot of books and I just flipped through them to look at the pictures, but I was never interested in reading what was next to them,” he recalls.

In addition to Marvel and DC, he read Franco-Belgian comics such as Asterix and the works of Moebius, the pseudonym of French designer Jean Henri Gaston Giraud.

He carried this interest into his practice while in college, studying at one of Pakistan’s most established institutions. By then he had considered architecture a simpler career, but decided he did not see himself “working for clients”, although elements of architecture eventually appeared in his work. He explains, “I wanted to do something where I had more control, where I was the author.”

His training hammered figuration as the default approach. “The first impulse was to do something realistic,” he says. “Coming from graphic media and comics, there was this focus on the figure, the build, the muscles, the anatomy, which automatically led me to paint figures.”

By 2006, however, Burki had begun removing his characters from their sets, flattening them onto blank backgrounds with little shading.

These hybrid beasts often possess recognizable animal features – horns, mouths, limbs and beaks – although some are faceless or transform into objects. At times his subjects may appear to have been re-adapted from the indigenous cultures of Asia and the Americas. In Ship (2007), a menacing creature with pointy ears appears as something out of folklore, while Totem (2007) depicts a more playful version of a totem figure.

Burki continued his distillation of form and features from 2009 to 2012. His subjects had become more angular, less identifiable in terms of body parts. This erasure removes other things – signifiers of time and place, clues to cultural contexts. The narratives begin to loosen in these works, with the artist allowing us to imagine them for ourselves.

“It’s about building a world through numbers,” he explains. “I wanted to create a series of characters that would help people imagine what world they would come from.” Its protagonists could easily come from underground or from outer space, and while this treasure trove of characters is ultimately Burki’s personal mythology, they lend themselves to many interpretations.

Although the difference in styles is obvious, some characters can be interpreted as transformations of past versions. A mechanical rocking horse resembling a blue sphinx in the 2003 painting Vespa becomes a smooth black bulbous thing in Fixed (2007), while the previous Totem (2007) develops into a wooden sculpture, Optimistic, by 2012.

Beginning in 2013, Burki’s attention turned to architectural and geometric elements, creating plane-like works such as Night walk (2014) and playing with perspective and color in In search of Eden (2014), the latter hinting at a more painterly approach that would become more prominent in later creations. A series of works on paper from 2016 includes his most delicate pieces, contemplative visions mapped onto grids. In The end of winterBurki captures the scattering of light in lines of pastel green and brown, their hues seeming to fade the more you look at them.

His Interval The 2017 series are paintings that mimic the look of concrete slabs adorned with small horizontal or diagonal lines that cross the frame. Burki also removes color, reducing his palette to brown and gray.

It was perhaps during this period of his practice that Burki forged his unique approach to painting, where subtraction always becomes active in a reverse process of creation. “When you spend a decade or more painting, you come to understand the painting itself as a subject. It’s not about making an image anymore,” he explains. These recent works were born out of questions around the support, form and material, he says.

In his 2020 show at Gray Noise in Dubai, titled A few minutes before falling asleep, Burki’s hand became even more restrained. Works constructed from the series in 2017 and 2018 morph and transform from paintings into more sculptural pieces. The dimensions were not rendered through the paint, but through the edges of the material surfaces. In a self-tribe (2019), the color is barely on the canvas. Instead, Burki migrated the colors to the wooden frames on the side, adding notches of blue, brown, and white.

His talent as a painter also becomes that of disguise. Its modular room Lodging, made of wood, could be confused with rubber or even stone with its matte gray coating. In 2022, the artist left the canvas intact in two of his new commissioned works; instead, it builds composites from multiple canvas segments.

It would be too easy to view Burki’s reductionist process as restrictive, but the effect is just the opposite. It opens painting to a new plane of possibility. The eye does not seek to flit from element to element as it would on a figurative piece, but deliberately moves across and along the space of the frame, careful not to miss a detail. With an art form as old and worn as painting, it’s rare to find artists tackling something new, although Burki has consistently and purposefully arrived at it.

Daydreams is at the Jameel Arts Center from March 5 to October 9. More information is available at jameelartscentre.org