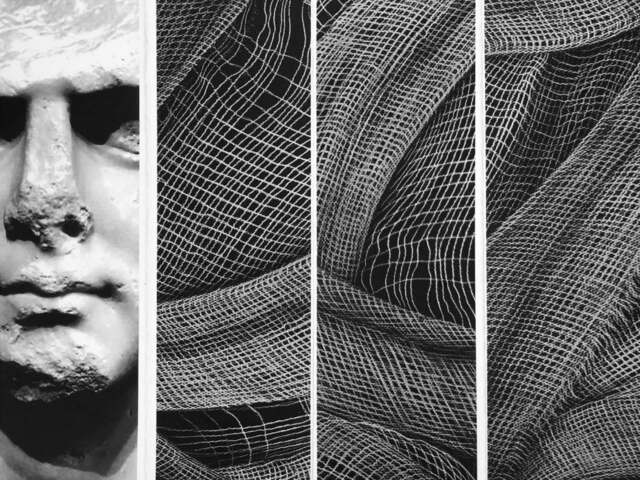 Artist Adeel uz Zafar said he is currently examining his unfinished works in a solo exhibition at Canvas Gallery, taking the audience through the artistic process and how the concept of definition influences an artist’s creative process.

The show, titled “Unrealized” and which kicked off on Tuesday, will run until October 27.

The title and theme of the exhibition are particularly unique because they take us through the work and the thought process of the artist instead of showing us a collection of finished or perfected works.

To this, it also leaves us wondering what defines a complete or finished work, opening up the debate as to why these have now been chosen to be exhibited, that too collectively.

The curatorial note explains this notion by stating, “In unpacking the term ‘unrealized’, it investigates both the often invisible work of the artistic process, as well as the conceptual trajectory that artists conjure up in their own minds as a light that shines on them. guide on their lifelong journeys of creative discovery and problem solving.”

Commenting on his solo exhibition, Zafar, also a curator and educator, said it as a way to show his whole journey and a way to connect more with his audience, examining the fluidity of his works.

“Process is a very important aspect of any artist’s work and trajectory. When you look at the work of an artist in an exhibition or a museum, they are completed, finished works. Little is known about what went on behind this process, or about the thought process of the artist when constructing a specific image, or about works that were not developed,” said he declared. company registrar.

“I think this show is about all of those processes as you work. Often there are a lot of things in your head that don’t materialize, things that you start and then leave unfinished thinking you’ll come back to it later.

On unfinished works that are revisited years later, he mentioned how an artist’s work is never truly finished, raising questions about the notion of completion. He also mentions that these changes can be technical or conceptual in nature.

The show also examines the theme of past, present and future, and what connected these phases, at this particular time. The curatorial note states: “Returning to older works, particularly those that have never been exhibited, or even perhaps executed, this body of work seeks new directions, making connections evident and making the ‘invisible visible. Zafar thus comes to push back the limits of artistic creation. and practice across time and space, through material and immaterial, blurring the lines between doing and undoing, navigating through these complex and nuanced fields. Again and again he brings us back to ideas of process, and the value assigned (or unassigned) and embedded in that, and in doing so, offers the audience an entry point to engage in their own practice through a methodology which offers transparency against opacity, continuum against conclusion.”

The result is a collection of Zafar’s artistic process through the years, reimagined.

In a previous conversation with company registrarZafar mentioned how he examines and revises his own work, even trying to make sense of his own progression and trajectory.

This exhibit, fittingly, does just that.

Works over the years, including prints, oil paintings, sculptures, even a collection of props from the artist over the years – Zafar’s instantly recognizable works include drawings of bandaged animals and stuffed – a selection of which is exhibited at the gallery.

Part of the collection also includes a series of works described as “rejected” presented in a series of prints, all identical to each other, hung from the ceiling to show its scale and volume, evoking the theme of repetition and of perfection.

Zafar talks about this element of repetition, citing how at this point he is able to recognize it as an element of his work, regardless of concept, technique and color palette.

The curatorial note states: “The works in this section challenge notions of both the idea of ​​control and that of sameness that is commonly conceived when thinking about the act of repetition.” Selection, then, in this current context, “leads us in new directions, reached through processes of revisiting and reinventing what was previously unrealized…”

When asked why he chose to exhibit these pieces and processes now, in the form and with the chosen works, Zafar said: “I think it is high time in my artistic career to present these things, mainly because my audience understands and recognizes me through a certain signature style, without realizing what’s going on behind that signature style – covering works and processes they may not have seen. ‘ve done illustrations, conventional paintings and more that the public may not necessarily be familiar with.

“I think it’s a good time to present this whole process to the public, in a coherent space, so that they also know what happened behind me to arrive at the position in which I find myself. today.”

The exhibition, which fused and created a body of entirely new works from unrealized works, is interesting as it takes us through the years of his artistic process, also offering collectors access to early works and works that have been discontinued or in progress, re-imagined in an entirely new form.