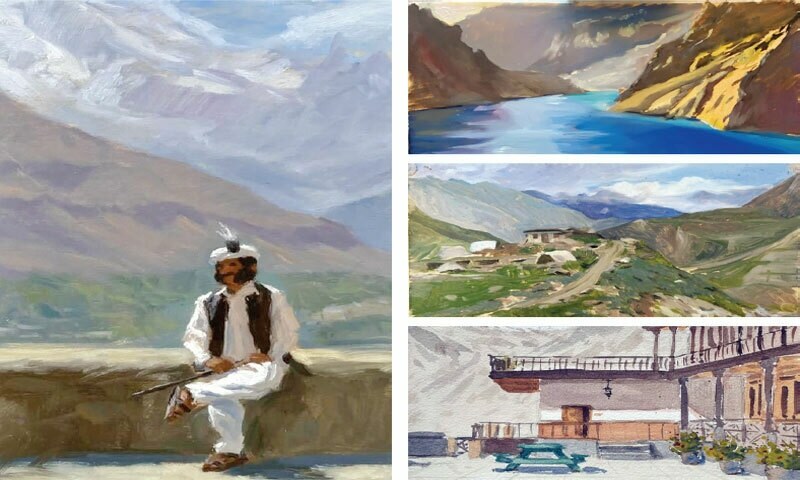 ISLAMABAD: Works featuring the scenic peaks, snow-capped sierras and verdant valleys of northern Pakistan, created by four artists from the Academy of Arts in Florence, Italy, have been exhibited at the capital’s Dastaangoi Gallery.

The artists spent 10 days in the north to create the paintings and create memories. Saara Knapp, Brandon Schaefer, Phoebe Carter and Louis Szapary responded to an artist residency program offered by the gallery and were thrilled after being accepted.

The schedule was more intense than the artists expected as they found themselves painting for six to seven hours a day, between traveling and sleeping.

“It was different stopping, taking pictures and getting back in an air-conditioned car. We stayed at each location for two to three hours in sand and mud. left their marks on our impressions. It was a sensory experience with the changes in light and temperature, a deeper way to experience all of these places,” said Phoebe Stewart Carter, who is a freelance artist.

Born in England, Carter began drawing and painting at an early age. In 2017, she was introduced to academic drawing techniques that were taught throughout the 19th century. She traveled to Italy in 2018 to begin intensive training at the Academy of Arts in Florence.

Saara Knapp, who is a Finnish-American artist based in Florence, Italy and the Hudson Valley in New York, USA, explained that she depicts what she sees realistically, that it is about painting landscapes, portraits and still lifes.

“Painting in the north was not like copying a single moment as in a photograph, but a conglomeration of many moments while we were in those spaces. We were gathering images of all those many moments of being there, especially the changes in light,” said the artist who earned a BS in Biological Anthropology and Evolutionary Studies from Binghamton University in 2016.

She now uses her scientific and analytical background to help navigate, transcribe and translate the world around her with her artistic works. She graduated from the full-time painting program at the Florence Academy of Art in 2021 and now works out of her Florence-based studio.

Brandon Schaefer is from Roseville, California, and his work revolves around drawing, airpainting, and watercolor. He shares his knowledge to turn this passion into a full-time career. Mother nature’s appreciation is what drives him to create his work and videos.

Schaefer captured the elements of truth in his landscape images, painting what his environment looks like rather than what it looks like. In his work, he created a kind of nostalgic place for himself, documenting things that meant something to him, that he wanted to bring back to remember this trip.

Austrian Louis Szapary studied from 2018 to 2012 at the University of Applied Arts in Vienna, where he obtained a master’s degree in fine arts with a specialization in engraving. He then studied painting and taught drawing and painting at the Academy of Arts in Florence.

Szapary loved to paint on top of Kho, Nagar (13,500 feet above sea level) which he described as an incredible place with stunning views of Rakaposhi and Diran Peak.

“The altitude we were at was higher than anything I had experienced at home,” he said.

The gallery’s co-founder, Amad Miaan, explained to his guests that this residency was particularly special.

“We took the artists through Batakundi, Karimabad, Nagar and Chilas to introduce them to these places as it is their first time in Pakistan. The idea was to show Pakistan in a different light and not through videos and photos, but to show it through their impressions,” he said.