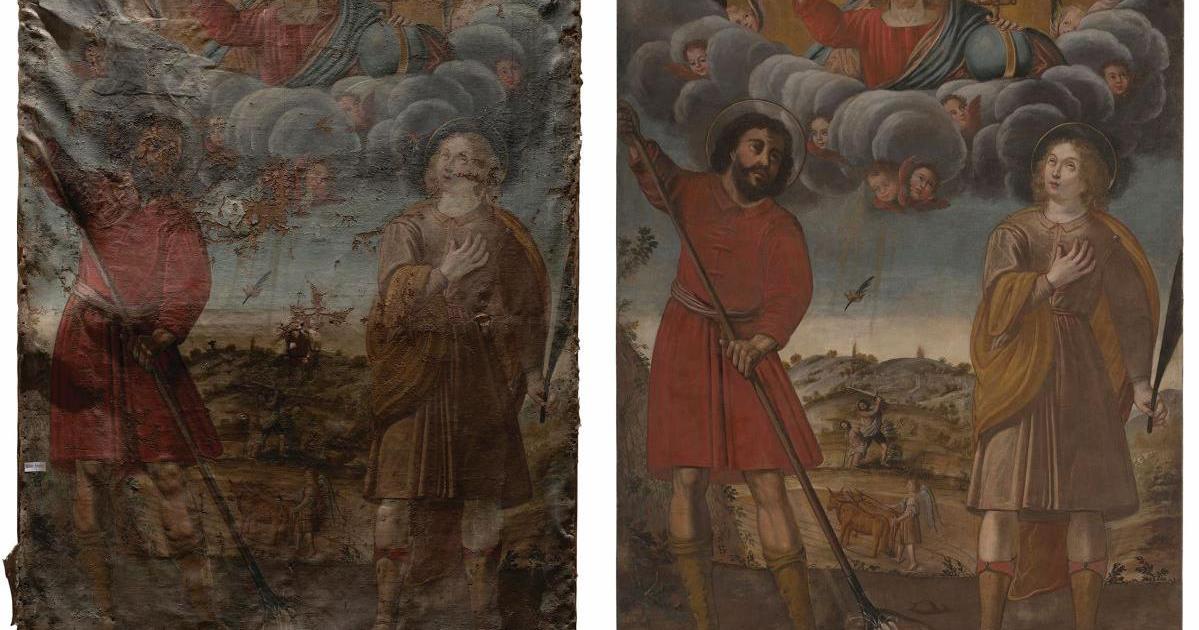 The construction of the new capital on Mount Sciberras resulted in a period of great economic prosperity for the people of Malta in the first half of the 17th century.

This economic prosperity spread to all sectors of the Maltese economy. Thus, when Bishop Cagliares, during his last pastoral visit to the parish of Qormi, noticed that most of the altars in the main apse were without dedication, the parish priest immediately knew who to contact to take care of the vacant altars. and order new altarpieces – the guilds.

Stonemasons and carpenters were the first to accept the offer – the former commissioned a painting depicting Saint Thomas (by Filippino Dingli), while the latter commissioned an Italian artist to execute an altarpiece depicting the Holy Family for their altar. The local farming community did not hesitate to take up the challenge and immediately took over the altar on which Our Lady of Itria was venerated.

The construction of new churches and palaces in the new capital and in the outlying villages generated enough commissions to encourage a number of Italian painters to set up their bottega in Malta. Painters like Bartolomeo Amodeo of Perugia, best known for his Ta’ Pinu Hypothesis (1619), Gaspare Formica, Lucas Killian and later Lucas Garnier, competed with Maltese-born artists such as Filippino Dingli, Valerio Failla and Francesco Doneo for such commissions.

Faced with such a plethora of artists, the farming community of Qormi was spoiled for choice when it came to commissioning a new painting for their altar. The choice fell on Silvestro Querio, a Roman painter living in Malta. Querio seems to have enjoyed quite a good reputation, especially with high-ranking knights like the knight Mandosio Mandosi.

On March 11, 1646, Pietro Farrugia, Pietruccio Cardona and Agostino Caruana, as procurators of the altar, and on behalf of the agricultural community of Qormi, reached an agreement with the artist for the commission of a painting representing St Pancrazio and St Isidoro. Notary Michele Rull published the contract, with Baron Ioseph Gensolen and Nicola Bencini as witnesses.

The parties agreed that Querio should receive the sum of ten gold medals uncie, payable in two instalments. The first payment was made on April 16, 1646. The painting was installed on the altar in August of the same year, because a note in the deed of the notary Rull indicates that the second and last payment was settled on August 13 1646.

The painting can be interpreted as an invocation for divine protection, so that the economic prosperity experienced by the local farming community at the time of commissioning will continue in the near future. The painting is dominated by the figures of Saint Isidore (on the left) and Saint Pancras (on the right).

Saint Isidore, the saint invoked by the peasants, is represented in the traditional iconography of a peasant performing the miracle of striking a rock with his ox-goad from which water springs. In the background, an angel driving an ox-plow, another reference to a miracle attributed to the saint and forming an integral part of the iconography of Saint Isidore.

The painting can be interpreted as an invocation for divine protection, so that the economic prosperity experienced by the local farming community will continue in the near future.

Saint Pancras, in the Catholic tradition the intercessor for good health and prosperity, holding the palm of martyrdom, invokes the protection of Christ the Savior dominating the upper part of the composition. Supported by clouds and stealthy cherubim, Christ the Savior heeds the invocation of Saint Pancras and, with his gesture of blessing, symbolically bestows divine protection on the farming community.

This religious painting bears witness to Querio’s watered-down Mannerist style, strongly imbued with vernacular expression. Nevertheless, such an altarpiece would have more than satisfied the devotional needs of the farming community at the time. This symmetrical arrangement of the main protagonists in the foreground, against a background of a distant scene, in this case a rural landscape, is typical of altarpieces dating from the first half of the 17th century in parish churches and chapels in Maltese villages.

Querio’s painting adorned the altar for just over a century, until around 1760, when the Brotherhood of Our Lady of Consolation commissioned a new altarpiece. Querio’s painting was transferred to the old sacristy of the church where it adorned one of the walls until 1934. In 1935 the painting was transferred to the sacristy of the Tal-Ħlas Chapel, to be brought back into the main church complex in 1989. Unfortunately, water seepage and high humidity led to dramatic deterioration of the paintwork, which was on the verge of failing beyond repair. 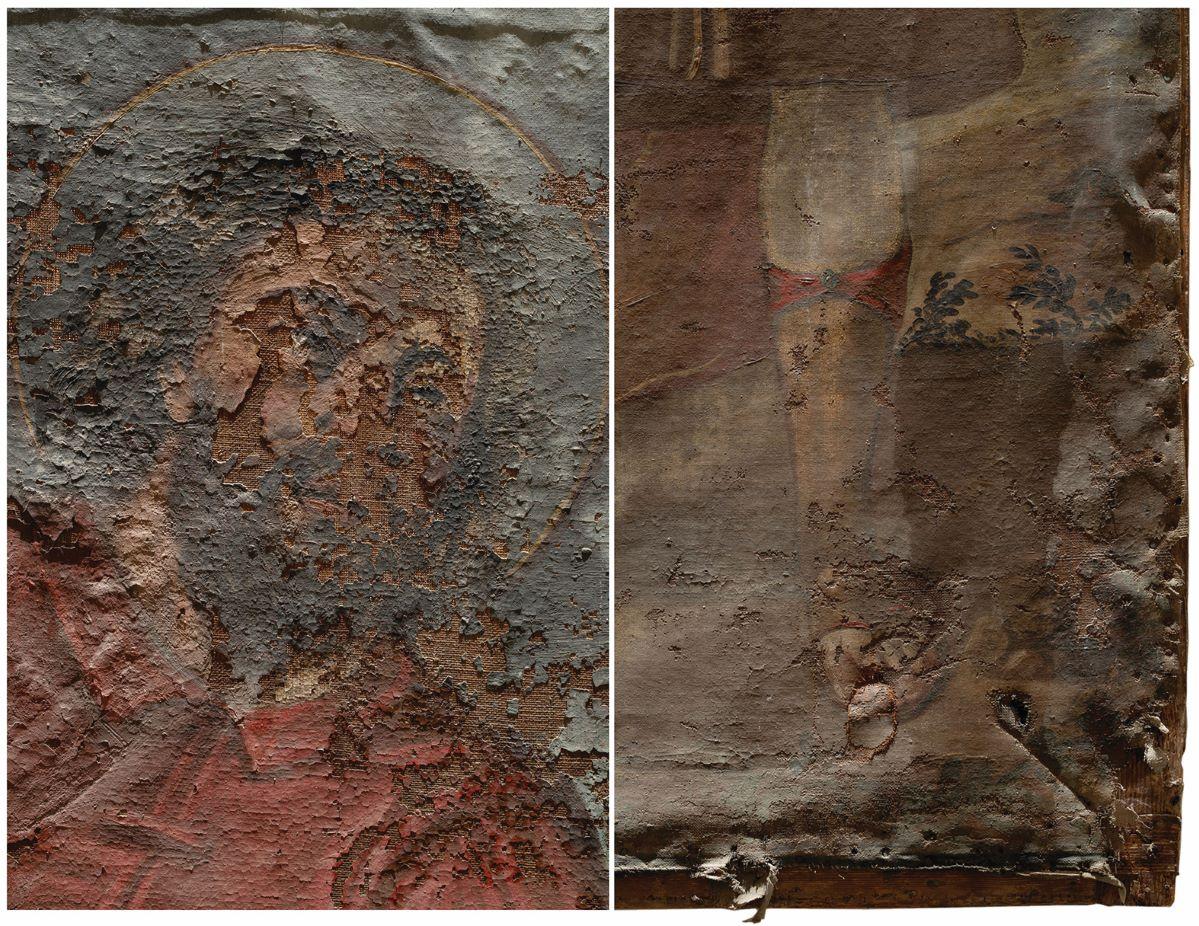 Details of the painting before the treatments. Photo: Manuel Ciantar/Suzanne Ciantar Ferrito

The shrinkage and movement of the canvas support, due to water infiltration, manifested itself in undulating deformations observed in all the layers composing the oil painting on canvas. As a result, significant areas of the stiff preparation (gesso) and layers of paint peeled off, resulting in a loss of approximately 30% of the original composition. Such loss became evident through the use of transmitted light, whereby a source of light was projected onto the back of the painting, which in turn was photographed from the front.

The condition of the paintwork has been further worsened by past amateurish treatment. Textile stains found on the back of the canvas to conceal tears, along with the presence of organic glues applied by earlier restorers, increasingly contributed to physical distortions in the layers of the paint and ultimately affected the readability of the composition. painted.

The appalling state of Querio’s historical painting stimulated the Brotherhood of Saint Michael (Fratellanza of San Mikiel) to obtain the necessary funding to save this work – a conservation and restoration project which was entrusted to Amy Sciberras Conservators – Fine Arts Restoration in 2021. The journey of its recovery and conservation has been arduous and complex, and has started within the parish museum of St George itself.

Many shards of paint, barely in contact with the support canvas, had to be stabilized before being transported to the conservation laboratory. A specific consolidant was applied in situ, using small fine brushes and syringes until the hundreds of paint fragments were temporarily stabilized, thus allowing manipulation and translocation of the paint onto the canvas. 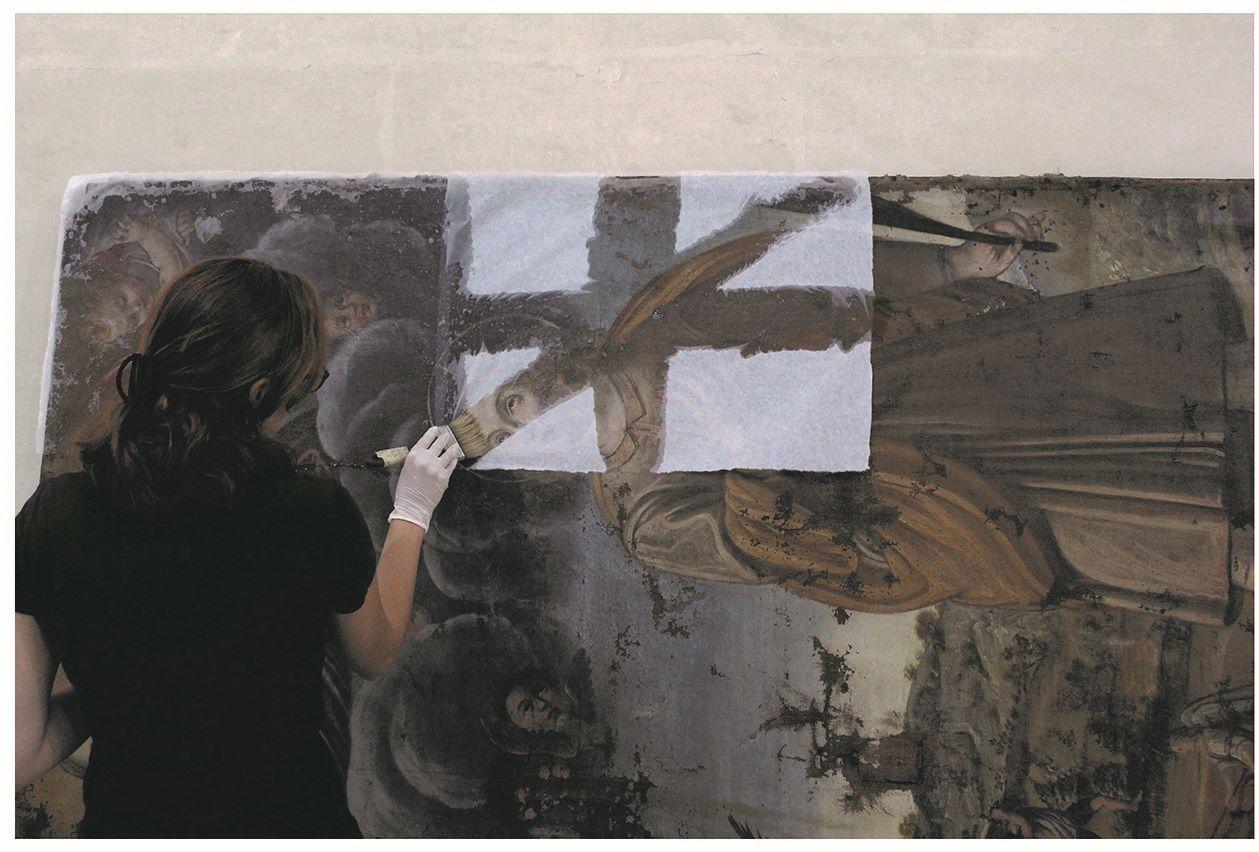 The local consolidation of paint flakes and the application of Japanese paper on the paint layer made it possible to manage them during the treatments. Photos: Amy Sciberras Conservatives 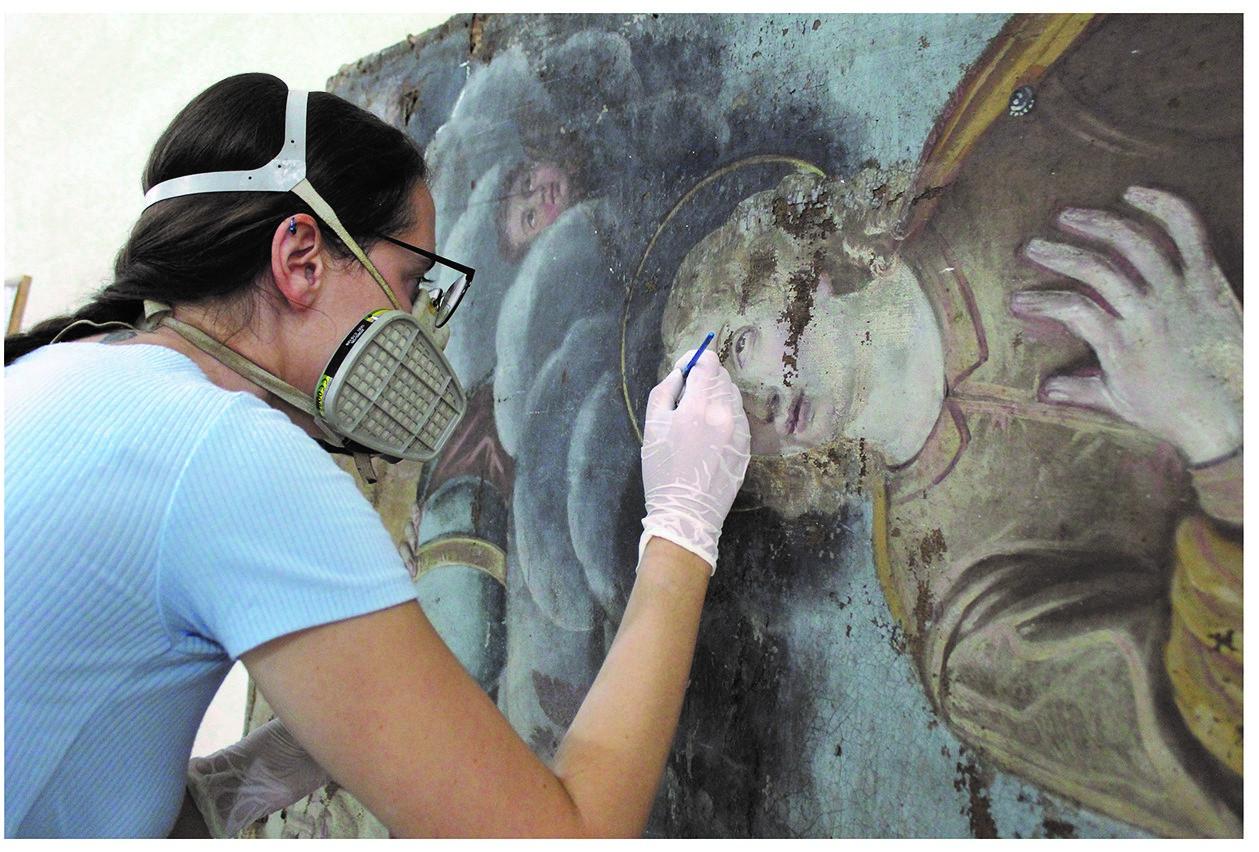 Once at the conservation laboratory, further stabilization treatments were carried out and the thick layers of grime, which coated the painted surface and contributed to its appalling condition, were cleaned using conservation procedures and tools. specific. These treatments were followed by thinning out the overpaint and past retouching, uncovering more of the original where it had survived the harsh conditions it had been exposed to over the years. 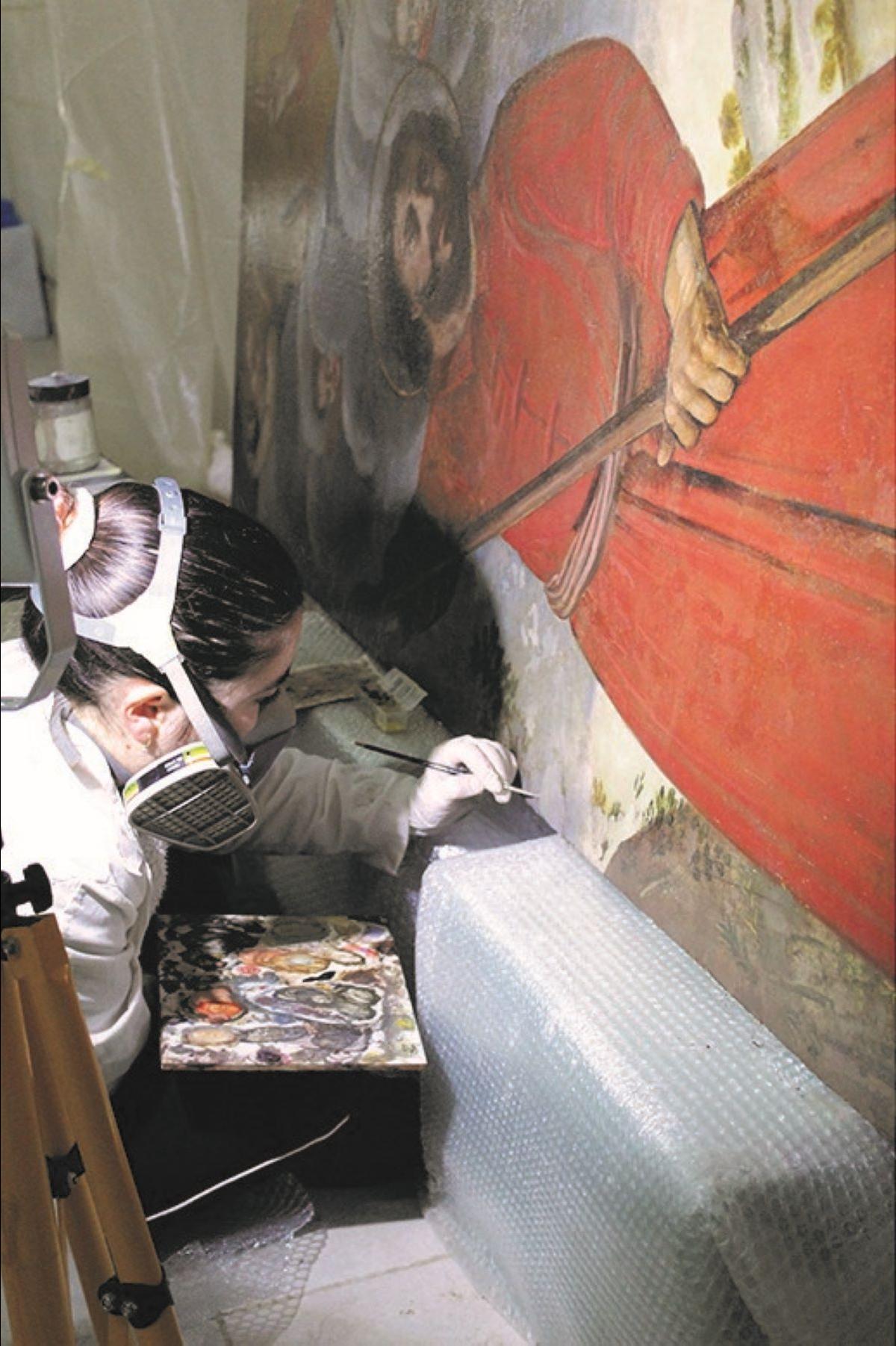 When filling losses in the primer/paint coats and their chromatic integration. Photos: Amy Sciberras Conservatives 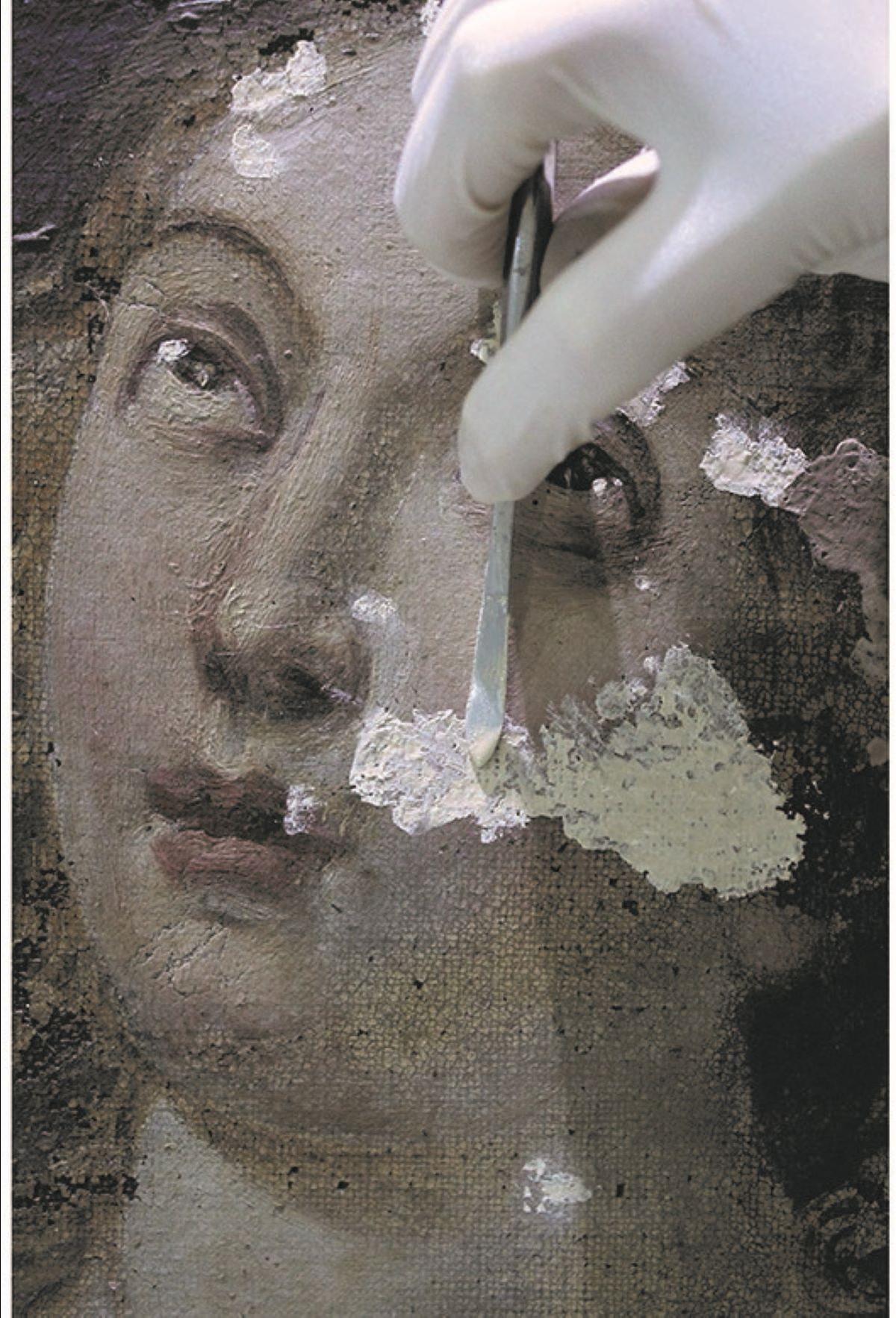 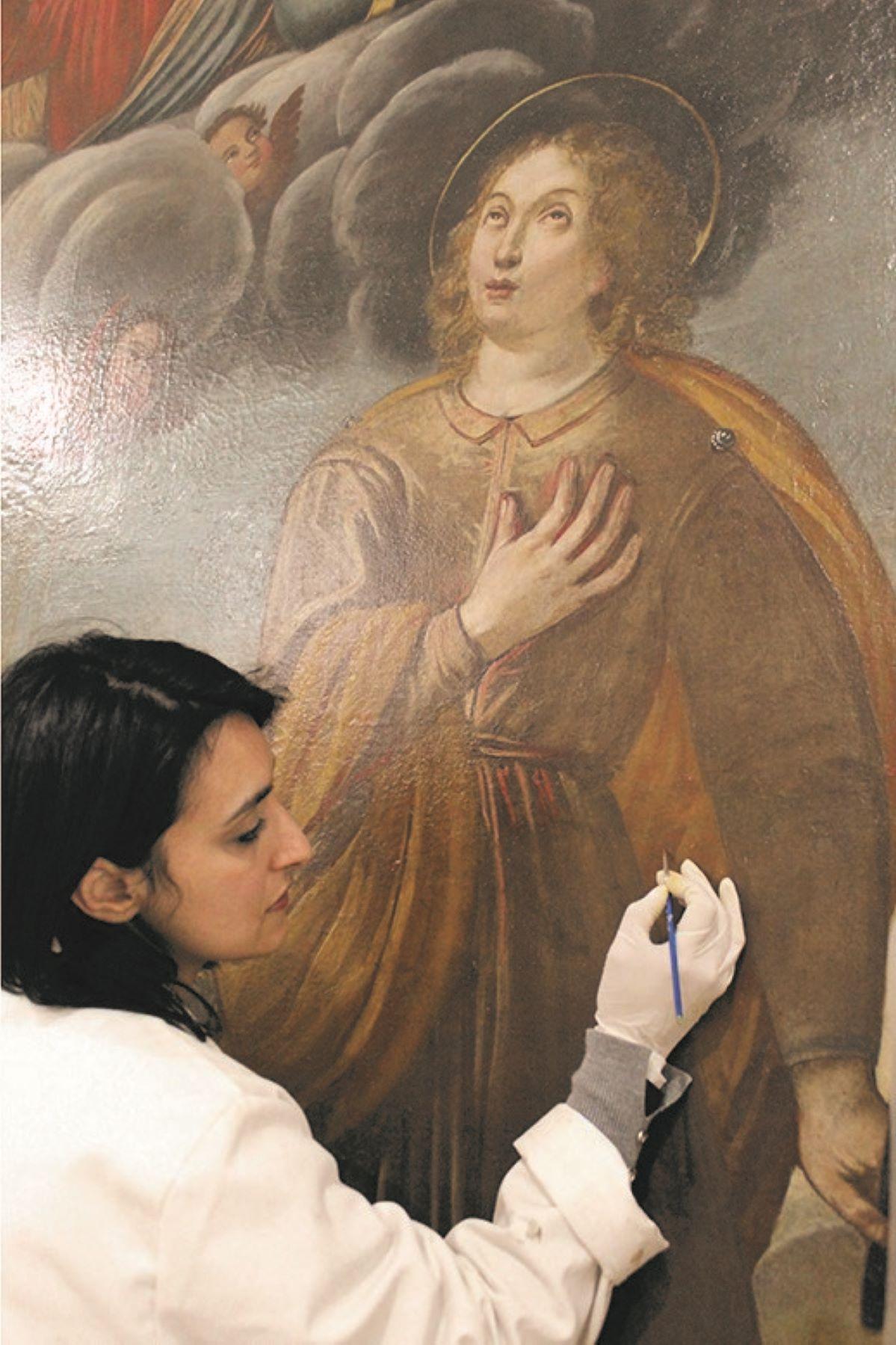 Other treatments performed included the complete lowering of physical distortions and deformations, the removal of past interventions and glues, which were found on the back of the canvas, the alignment under magnification of the threads cut from the tears of the canvas, their repair and reinforcement, and the application of a secondary canvas backing to the treated original. These conservation treatments ensured the rescue and stabilization of Querio’s historical painting.

The final phase focused on restoring its full legibility through filling and chromatic integration of gaps, thus restoring its aesthetic character while respecting its integrity, nature and meaning. This ensured that it could now be exhibited, studied and enjoyed by the current and future community.

This conservation-restoration project was entrusted to Amy Sciberras Conservators by Fratellanza of San Mikiel of St George Parish Church, Qormi, and coordinated by Joseph A. Bugeja. It has been made possible with funding from the EU under the Malta Rural Development Program 2014-2020 and the Malta Voluntary Sector Council under the NGO Co-funding Fund.

Amy Sciberras thanks her team, including photographers Manuel Ciantar and Suzanne Ciantar Ferrito, Michael Formosa for making the new chassis, Bernadine Scicluna with whom the painting was discussed, and everyone involved.

Amy Sciberras leads a team of curators and has been entrusted with restoration projects of national and international significance. She can be contacted via the website www.amysciberras.com or by e-mail [email protected]

Joseph Anthony Bugeja is a Chartered Accountant active in the management of EU-funded projects by voluntary organizations and is the author of several articles of a socio-cultural nature.

Independent journalism costs money. Support Times of Malta for the price of a coffee.