The sidewalks of Memorial Park came alive on Sunday with the Capital Chalk Fair.

Artists and families turned out in droves to make Memorial Park their canvas, using chalk to showcase their creative skills and share a variety of messages. The annual Capital Arts event was lively.

More than 127 people registered to present a chalk drawing before noon on Sunday, with more walking. Capital Arts chief executive Sarah Scheffer said the increase in numbers this year is exciting.

“I love this event,” she said. “It’s just this big community art scene.”

Scheffer said the nonprofit has hosted the Chalk Art Fair for just over a decade, but attendance has been hampered by the COVID-19 pandemic.

It really picked up last year when around 90 people came in, she said. Scheffer limited attendance at this year’s fair to 140 attendees.

“I told them once when we got to 140 to stop because we would be out of chalk,” she said.

Capital Arts provided attendees with a box of multicolored chalks and had extra colors on hand if needed. The artists brought their own creations and had about five hours to bring it to life.

Kim Goff and Nikki Long, a pair of Jefferson City moms working in a plaza next to their daughters, had a theme for their design: “Traveling the World with Books.”

Long is a reading teacher at Fulton and wanted to share a message that encourages children to read and travel to discover the world around them. She said children need to hear more of this message.

“They can go anywhere reading a book,” she said. “One of my favorites is ‘Nim’s Island.’ The girl sits down and she opens a book and it all happens around her as she reads the book.”

Long and Goff placed second in the group category last year with a “Save Our Rivers” theme. The self-proclaimed hobbyists said they just like to play with chalk and the fair is a community way of doing it.

“We meet a lot of friends we haven’t seen since our kids were in preschool,” Goff said.

Long said the fair seemed to be busier this year than in the past and it was nice to see people of all ages getting creative with chalk.

“It’s really great that the word is getting out and people are coming here to do it,” she said. “It’s a good family event. It’s just a good family bonding time – get out of the house, spend time outside and away from the phones focusing on the arts.”

Clara Tollerton, Brylee McComas and Keelie Kesel, who are in fifth grade together at North Elementary School, filled their spot through the park with a variety of colorful patterns using techniques they learned in school, like shading and color matching.

They said coloring was fun and they wanted to do it with their best friends.

The children filled one part with cool colors, another part with warm colors, then kept the darker tones in another area.

“I really wanted to do patterns this year and thought if there was more color it would be better,” Clara said.

JC Rocks is a Facebook group with over 11,000 members. They paint rocks and hide them in outdoor spaces in and around Jefferson City for people to find. The hope is that people post pictures of rocks they find on the Facebook group.

“We had so much fun working with them that we asked them to schedule their event on the same day again this year,” Scheffer said. “And we will probably continue to do so. We love working with them.”

Jeremiah Metzen and his daughter-in-law, Darby Minter, 11, have been attending the Capital Chalk Fair from the start, Metzen said. They filled the edges of their square with colorful mushrooms.

Darby’s grandmother helped start the JC Rocks band, and Metzen said they were going to support her and enjoy the art and the day out.

Metzen said it looks like the fair has grown over the years. Previously, it was at a smaller park with fewer people and fewer volunteers, he said.

“I think a few years ago the mayor talked about it and we started to really see it grow,” he said. “And now we showed up here today and there’s just a lot more people, a lot more volunteers, there’s vendors at different booths, more activities to do and bigger crowds, so I think it just grew a lot.”

Yvonne Bulson is a freelance artist from Jefferson City who has been doing chalk art since 2015. She said she discovered the fair while a student at Lincoln University and has done it every year since. .

In previous years, Bulson said people stopped while she was working on her article to ask her questions. She tells them about her art and gives them a business card, which resulted in a few commissioned paintings.

“It’s great because it brings artists here and the city actually sees all the artists in Jefferson City that they might not have known,” she said.

Oil paint is Bulson’s favorite medium, she says, but she uses a bit of everything. Chalk forces him to get his hands dirty.

Bulson chose a toucan for his design this year. She said she thinks they are beautiful and she could use all the colors provided to her to bring it to life.

“Even applying it, I haven’t really done any shading yet and I’m already dirty,” she said. “It’s very dirty, but it’s fun.”

A crowded park schedule pushed the fair to Sunday this year, Scheffer said, but Capital Arts plans to move the event back to the second Saturday in September next year.

The gallery is also gearing up for another hands-on experience later this month.

Capital Arts is accepting pieces for its Up Close & Personal interactive exhibit through tonight, with possible extensions.

The exhibition will feature enlarged pieces of an animal, object or person, and viewers will have the opportunity to guess what they are looking at. Artists with the most accurate guesses will win a prize, Scheffer said.

Scheffer said the gallery doesn’t often have hands-on exhibits, so she’s delighted. The exhibition runs from Thursday to November 5, with a reception scheduled for September 22.

Kim Goff (left) and Nikki Long (right) work on their design with the theme “Traveling the world with books”. Long is a reading teacher at Fulton and wanted to promote a message of learning through reading and travel. 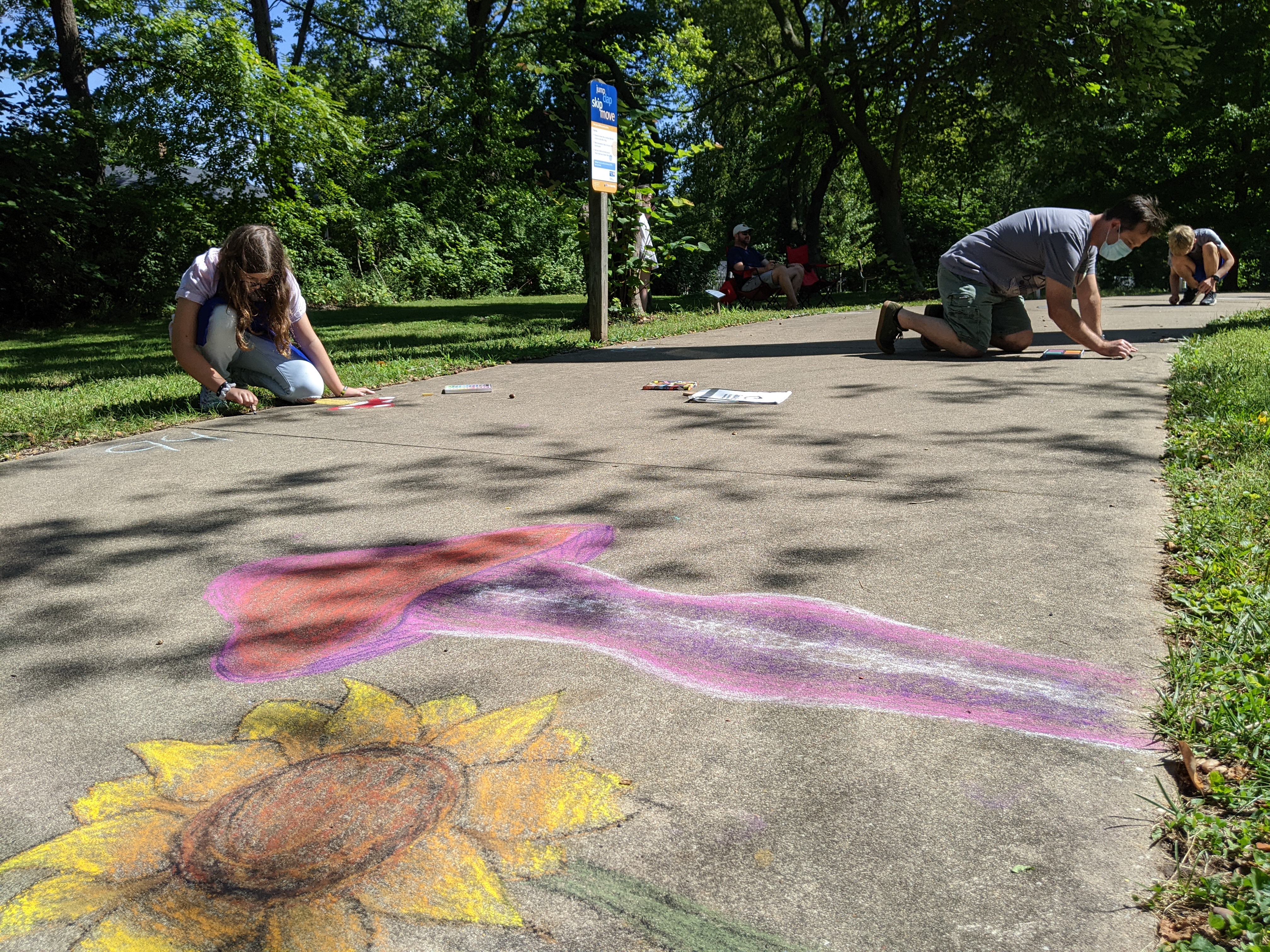 Darby Minter (left), 11, designed her bob to fill the perimeter with shiny mushrooms with the help of her stepfather Jeremiah Metzen (right). Metzen said the Capital Chalk Fair has grown tremendously in the nearly 10 years he has attended. 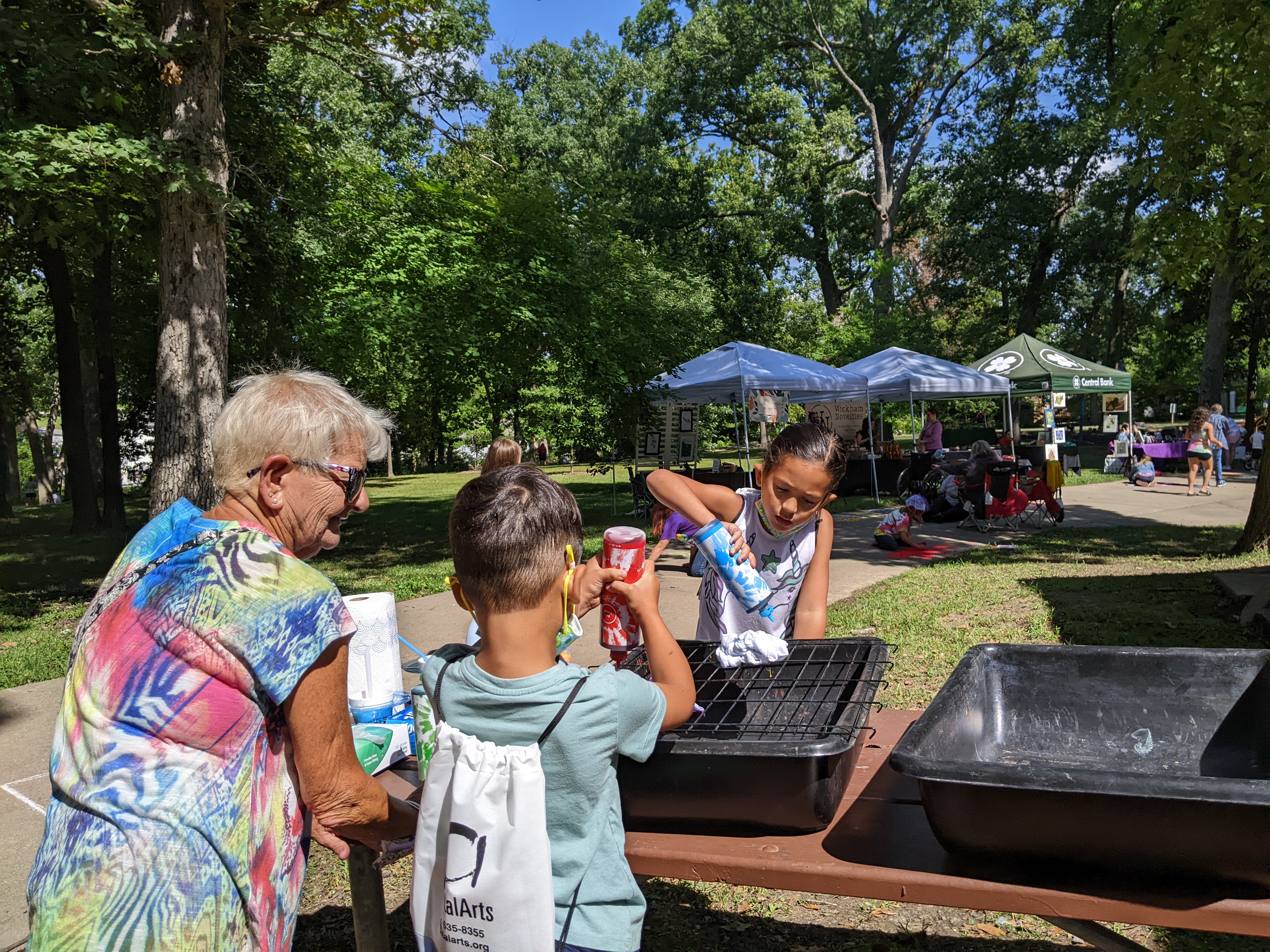 Jennifer Durham helped her grandchildren Coraline and Lincoln tie-dye at the Capital Chalk Fair on Sunday at Memorial Park. In addition to chalk art, people had the opportunity to complete free art projects, listen to music, or shop at various vendors and food trucks. 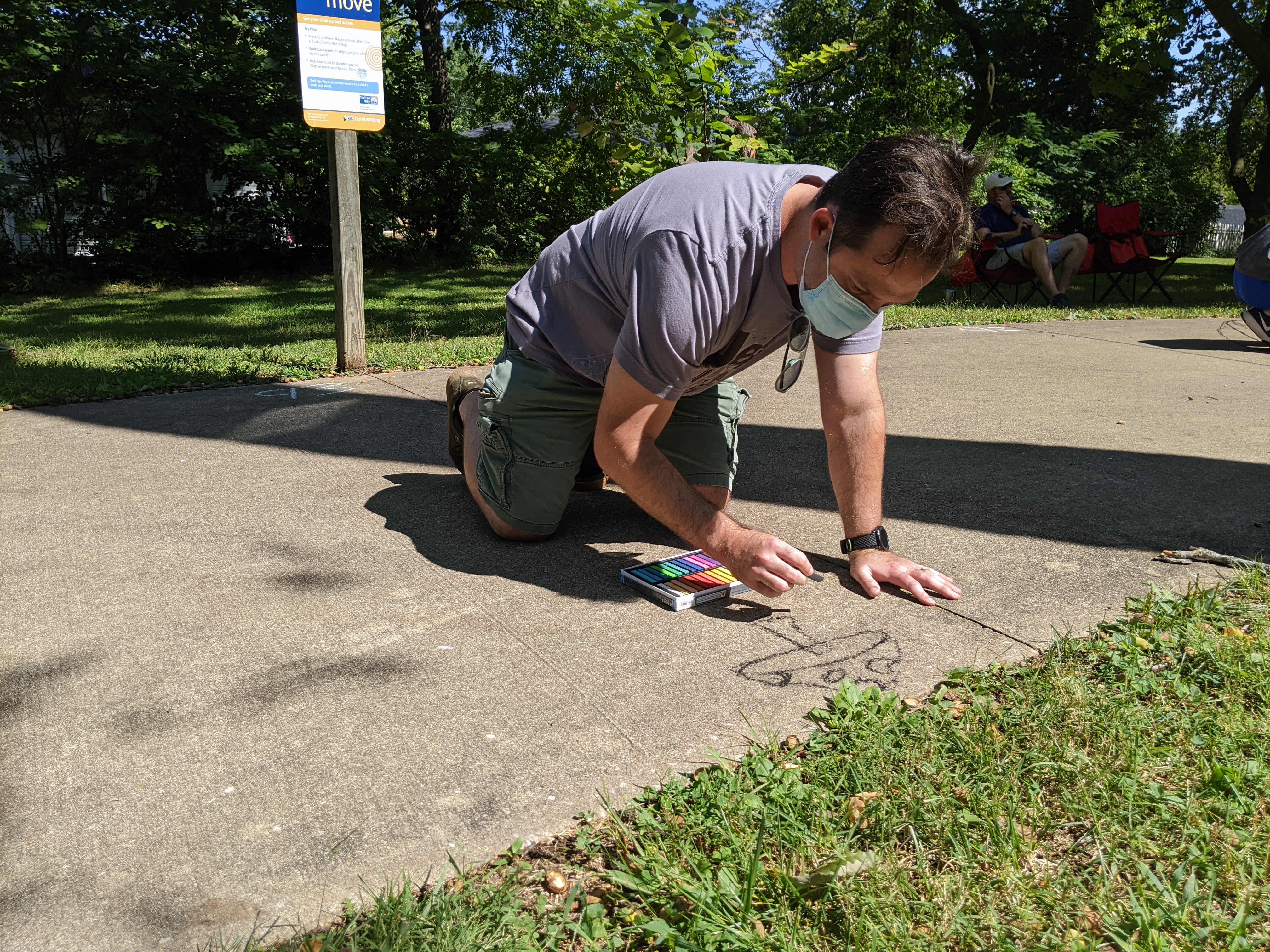 Jeremiah Metzen adds a mushroom to the design created by his daughter-in-law during the Capital Chalk Fair Sunday. 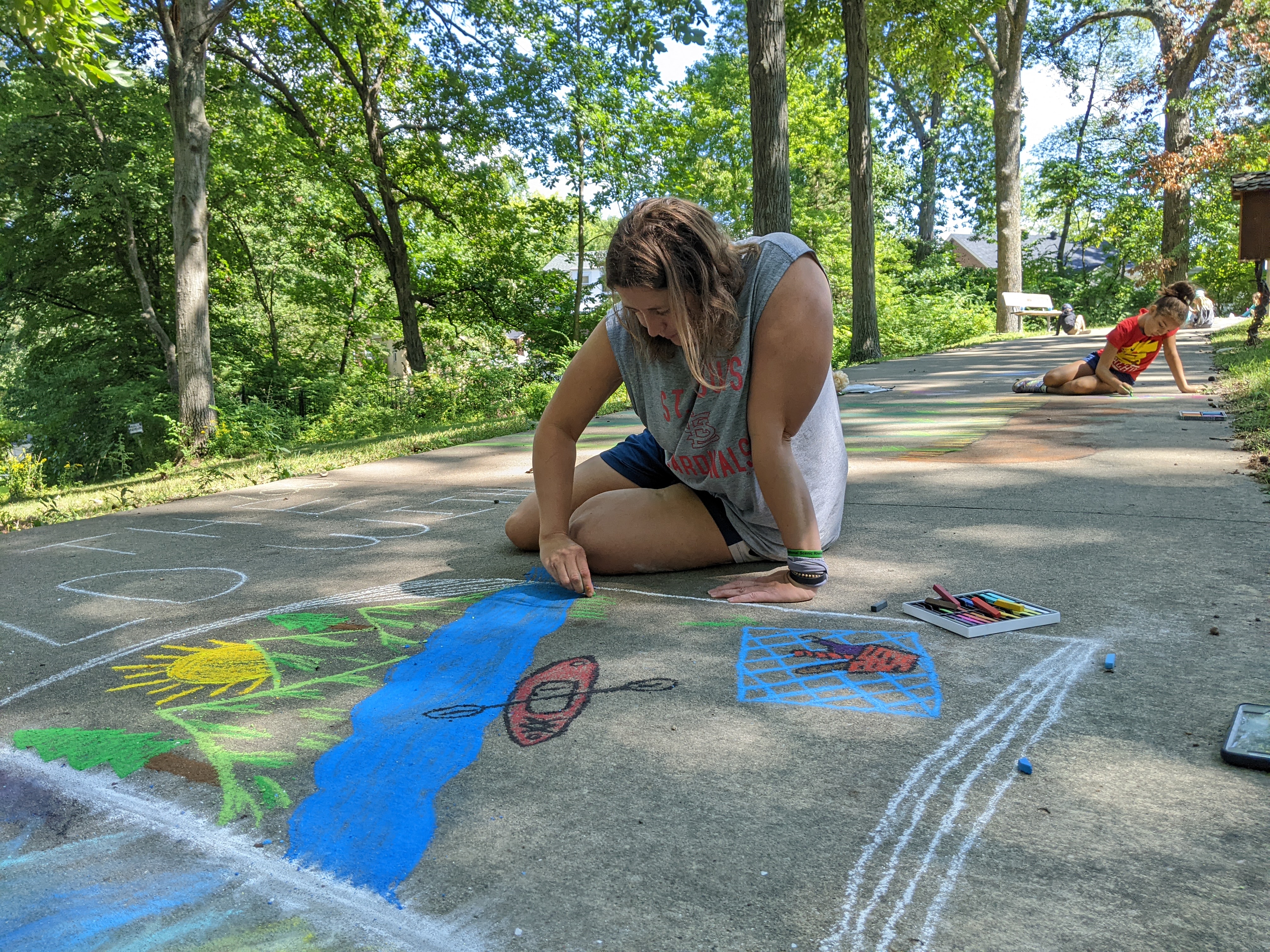 Nikki Long adds details to her “Traveling the World with Books” design on Sunday. 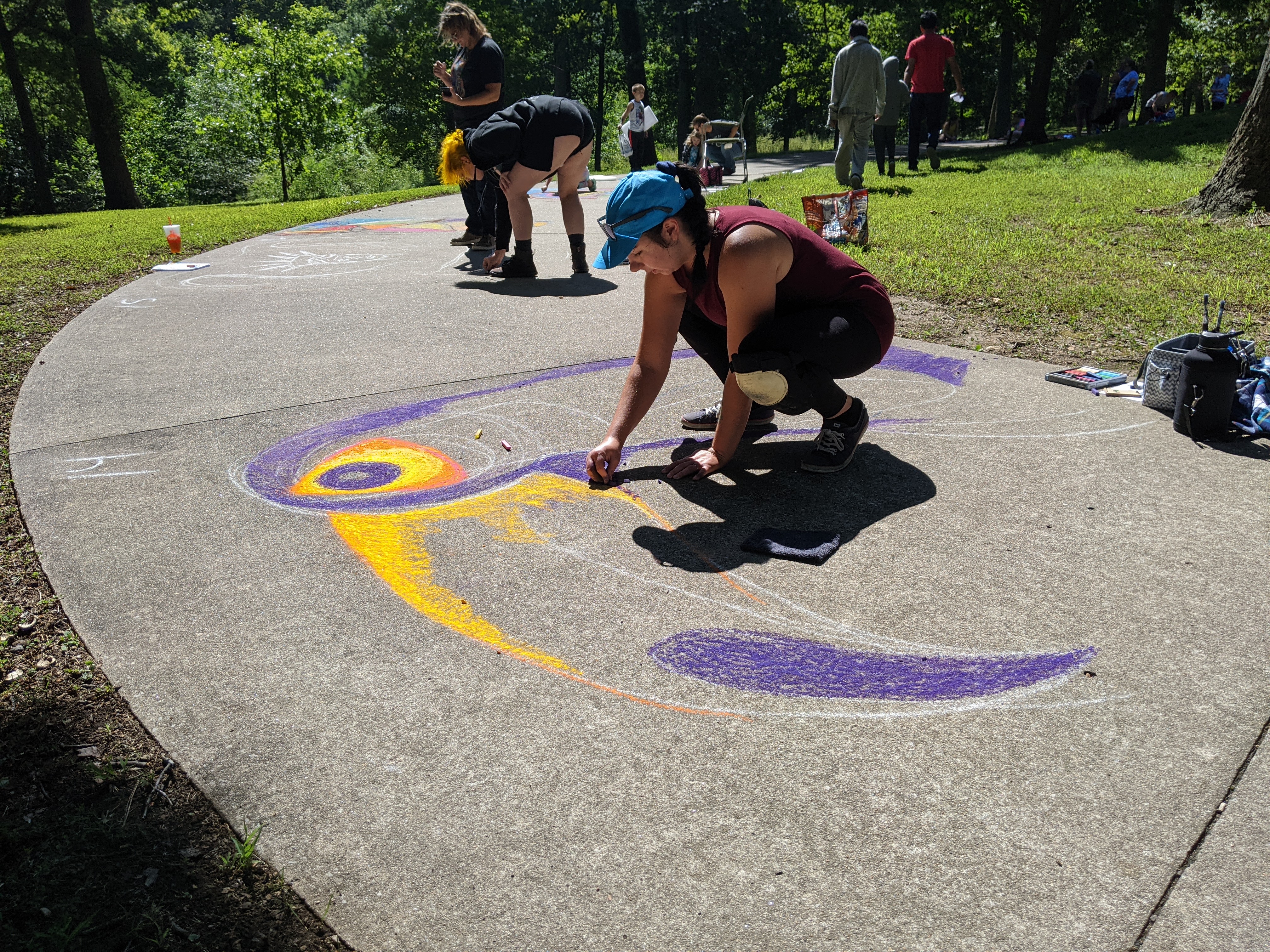 Yvonne Bulson, a freelance artist, said she heard about the Capital Chalk Fair while a student at Lincoln University in 2015 and has entered every year since. She said the fair can be a great exhibition for artists like her.