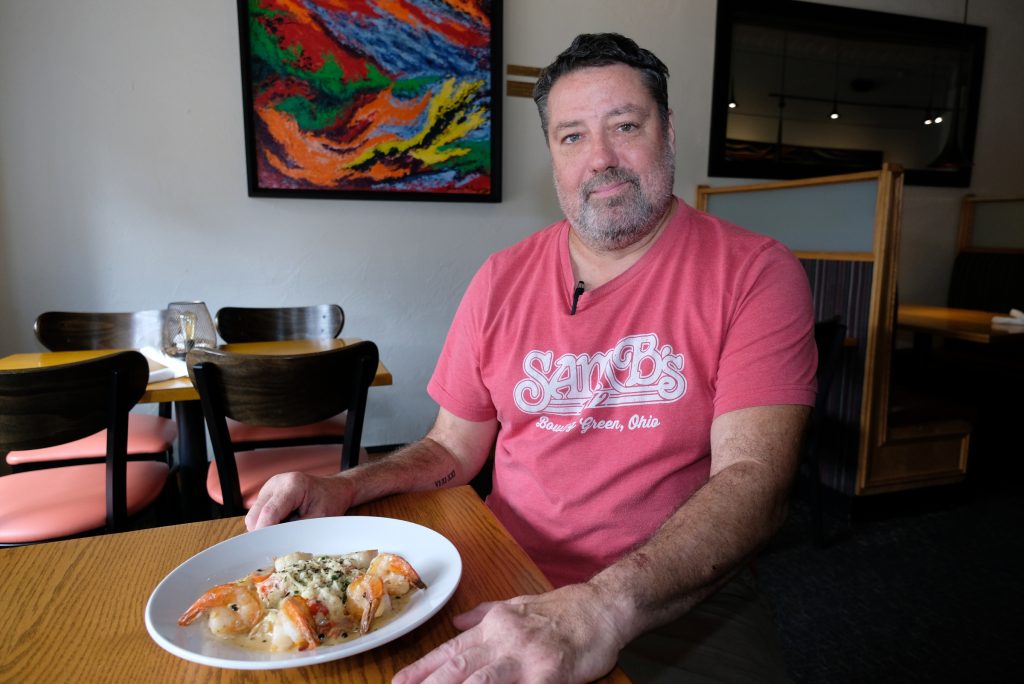 SamB’s restaurant in downtown Bowling Green has been bringing popular dishes to the community for over half a century – since 1972.

Originally a northern Italian rice dish with a history dating back to the 14th century, the rice is cooked with broth until it reaches a creamy consistency.

“It’s definitely one of those dishes that falls under the classification of cucina povera, or poor man’s food,” Lawrence said. “There is a little technique behind it.

“When you can take something as simple as a grain, like rice, and turn it into the true center of the plate, you know you have a winner.”

There are too many variations to count. The dish he presented to the Sentinel-Tribune was a shrimp and scallop risotto, but the recipe is a chicken risotto.

“It’s on the menu, but it’s not something so difficult that a home cook couldn’t make it, or even adapt it,” Lawrence said.

“It could be chicken risotto – risotto is kind of a blank canvas. You just have to make the risotto from Arborio rice and then it’s really up to the home cook. You can add mushrooms, different vegetables or whatever they want.

Lawrence says if you want your own variation, just ask the chef. It is likely that he will be able to cook according to your order.

“We can make it to order when the customer walks in – a little more chicken broth, a little white wine, lots of cream, lots of parmesan cheese to get that cheesy rice going – that’s really all it takes. ‘est, is an Italian form of cheesy rice,” Lawrence said.

“Every kitchen has a version of cheesy rice and you see giant scallops, jumbo shrimp, you present them artfully on the plate, you finish with a little more parmesan cheese, and you just add a simple butter sauce for a little more flavor, and this is the dish that comes to you.

For Chef Lawrence, who has been at SamB for five years, Italian cuisine is a favorite, but he admits that the menu at SamB includes several cuisines.

“I think the Italian is one that I lean heavily on just because I was part of the Mancy restaurant group for 10 years,” Lawrence said.

“I was the second chef at Mancy’s Italian for most of them, but I feel like I don’t like to rank either,” he continued.

“I think I like working with seafood in particular, fresh fish and fresh ingredients, salad techniques, and I can do some French, I can do some Spanish, I can do a bit of everything, like Asian, know you.”

Lawrence says he’s “worked in the food industry for more years than I can remember, and I kick my ass every year as I get older, but here we are.”

His interest in food began while growing up in Lansing, Michigan.

“I credit my mom (Tammy) more than anything. She gave me a lot of responsibility when I was younger,” Lawrence said.

“I had a younger brother and a younger sister, and both parents worked, so she made meals ahead of time for me to heat up or finish, so that was my responsibility growing up,” Lawrence continued.

“So she was like, ‘At that point, make sure that pan or anything that’s oven safe, cook it that long,’ and all I had to do beyond that – add a few cans of cream of mushroom soup or something – who knows?

“It’s been so many years now, so I think that’s one of the reasons I’ve stuck with food despite the multitude of things I’ve done and tried.”

Lawrence learned his craft in the kitchen, not in the classroom.

“I had the opportunity to travel quite a bit when I was younger,” Lawrence said. “I’ve worked with some really good talented chefs who showed me and I’ve always been a bit more self-sufficient than a lot of people where I took the time to read the same textbooks those guys read in school .

“I would buy the books and read them, and you know, what I could practice from the book, I would take it to work with me and work on these different things.

“I had the opportunity to work in Boston for a while, DeKalb, Illinois, Savannah, Georgia, Bonita Springs, Florida, so I traveled working in different restaurants, country clubs and that kind of stuff, in learner.”

Farrell and Lawrence must be doing something right – they’ve both been successful in this for decades.

“Regularly we get a lot of regular customers here, and when you see the same customers coming here every week, week after week, that’s how great it is, that’s more than enough compliments for me” , said Lawrence.

“There are a bunch of people – I can’t name them all. They come every week, sometimes several times a week, and if it wasn’t good, they wouldn’t be doing it.

Combine 1 tablespoon of salt and the chicken broth in a medium stockpot. Bring to a boil over medium heat.

In another medium pot over medium heat, add the olive oil and the diced onion. Sweat the onions until translucent, sprinkle with salt. Then add the Arborio rice and lightly toast the rice grains. Add the wine and reduce gently until it is absorbed. Then add enough hot chicken broth to cover the rice and bring to a simmer, stirring frequently. Let the Arborio rice absorb the liquid and check the tenderness of the rice. If it’s not cooked enough yet, add a few cups of liquid at a time until the rice is al dente.

Once the rice is al dente, stir in the Parmesan, butter, black pepper and any additional salt to taste.