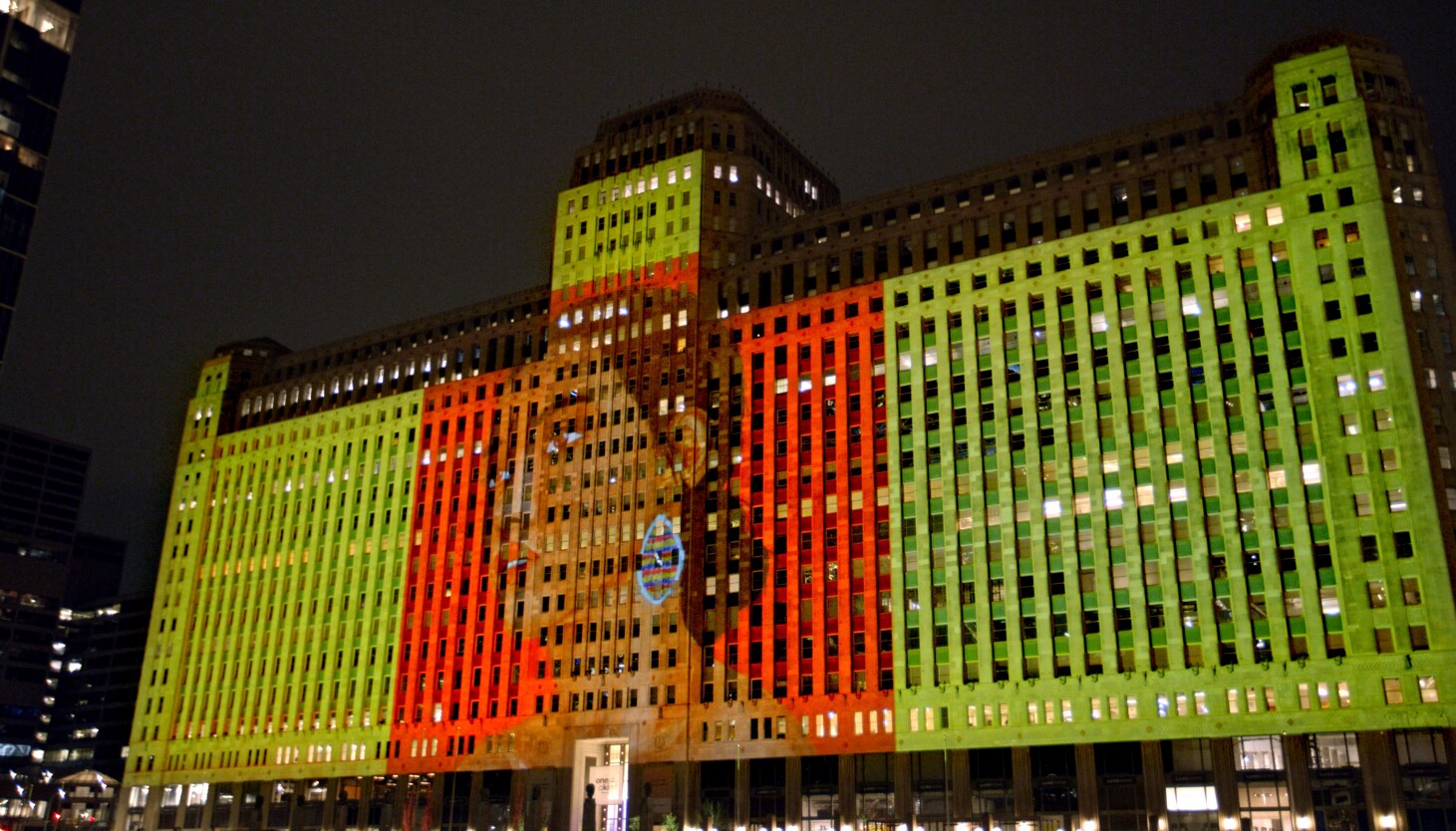 Tiffany Delgado’s goal was to represent her native Ecuadorian culture through art.

When she began painting her self-portrait, the 17-year-old Von Steuben Metropolitan High School student considered featuring a colorful Ecuadorian necklace. But in the end, she zeroed in on an earring she and her mother brought from the South American country when they immigrated to Chicago about a decade ago.

Through two periods of AP art class — plus a long painting session on Saturday — Tiffany did her best to show off the flair that reminded her of home. Turns out she did such a good job that the whole town will soon get a glimpse.

Tiffany’s artwork, titled “Beaded Ears,” will be one of eight painted portraits of Chicago public school seniors that will be displayed beginning Friday on the facade of the Merchandise Mart building.

Anyone strolling or driving through downtown Chicago in the next two weeks can get a glimpse of the animated projections selected in a citywide student art competition in year two. of the district’s partnership with Art on theMART. They will be accompanied by an original musical score – also composed, produced, engineered and performed by a CPS student – ​​which can best be heard on the Riverwalk between Wells and Franklin streets. CPS Projects will run twice a night at 8:30 p.m. and 9 p.m. until May 4.

“It expresses how proud I am of where I come from and remember [Ecuador] every day here in Chicago,” Tiffany said of her portrayal. “It reminds me of my family there, and also how very colorful our culture is when it comes to clothes, but also food.”

Tiffany and the other seven students submitted their pieces to the all-city high school visual arts exhibit, which since last year has worked in conjunction with Art on theMART to also select the best works of art to screen. on the market.

While the Art on theMART team love how the portraits appear on the vast canvas that is the Merchandise Mart, executive director Cynthia Noble said that wasn’t necessarily the plan for all the pieces to be. The portraits. But there were no complaints when that’s what all the top picks turned out to be.

“It was a wonderful, happy coincidence,” Noble said. “We wanted to represent as many regions of the CPS system as possible. And so we had this idea of ​​representation in mind anyway. And then what better way to provide a sense of diverse representation than to show portraits of students.

The other pieces were painted by students from Lake View, Amundsen, Senn, Ombudsman, Lindblom, ChiARTS and Westinghouse, while the musical score was done by a student from Senn. The portraits were originally two-dimensional paintings, but the Mart team worked to animate them so that they move to the side of the building. Going forward, the goal will be to expand the partnership with CPS for students to create animations from the get-go, Noble said.

“My Hair is Golden” by Jimmilee Kabba

“My Happy Girl” by Mia Neiman

“Self Portrait” by Robin Lockhart

Tiffany said art was a hobby, but she started taking it more seriously in high school when her art teacher recognized her skills. She’s still undecided about majoring at the University of Illinois-Chicago, where she’ll start college next fall, but she plans to pursue architecture to keep some form of art in her life.

She and her family plan to attend a ceremony at 8:15 p.m. Friday for the premiere of the CPS projects. Laughing, she predicted that her mother might cry when her portrait shines on the side of the Mart.

“I really never would have thought that one of my artworks would be selected and get so much recognition. It’s just something that I’m super proud of because I made my parents proud and also my teachers and my friends.