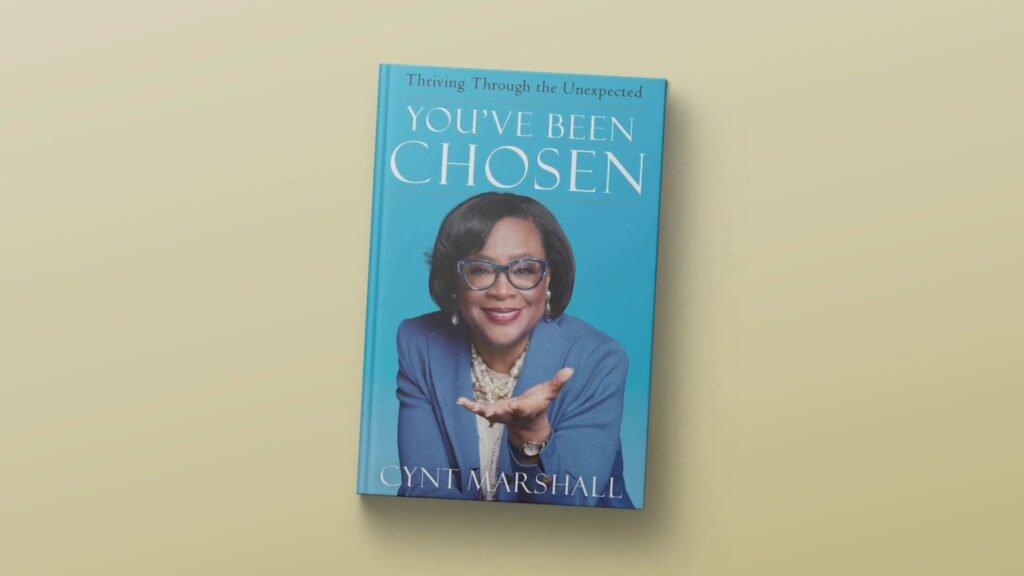 Geoff Bennett: For Dallas Mavericks CEO Cynt Marshall, the path to success was anything but easy. She grew up in the housing estates of Richmond, California and lived through a painful childhood with a violent and abusive father. But she credits her mother for instilling an unwavering work ethic and unwavering faith.

Cynt Marshall: She has just transmitted to me this spirit of courage, grace and resilience. I’m standing on this Scripture. So I really think things happen for a reason. But I know I’ll do better on the other side.

Geoff Bennett: I spoke with Cynt Marshall last week about his new memoir, “You’ve Been Chosen: Thriving Through the Unexpected”. She recounts her personal and professional journey to becoming the NBA’s first black female CEO, after more than three decades of climbing the corporate ladder at AT&T. I asked her about the pressure she was under at the time, like bosses telling her to change her appearance and even change her name to succeed.

Cynt Marshall: Well, I think when it first happened to me, and my first week with the company, I just answered. Because in those two cases, I think the women were very well supported, that they knew that there was a kind of culture in which we worked, or that they believed that there was a culture in which we were working, and they wanted me to succeed.

I was 21 and did what they asked me to do. I took off my braids and I took off my red shoes and all that. But 19 years later, I just said, by the time I hit 40, and I actually knew what kind of company I was working in, I knew it was a company that really cultivated authenticity. And I was right, because someone called after that and fixed everything.

Geoff Bennett: I was going to say to your credit, when you were vying for that promotion, you refused the boss who said you had to change your name, cut your hair, wear white, not wear a bold quote , without quotes, in ethnic colors, that you said it wasn’t for you, that it wasn’t the job for you.

Cynt Marshall: Right, when someone starts to cross the line asking me to fundamentally change who I am, that’s when I have to draw the line. And when I was told to use words like lucky instead of blessed, and to be Cindy or Cynthia and not Cynt, I said, OK, I’m Cynt. I’ve been Cynt all my life. I believe I am blessed, not lucky.

I had a great job, a great job as vice president, and I didn’t want to lose it. So I just asked her to help me figure out how to keep my job, but say no, to this one. And so I think that shaped me as a leader is that authenticity is so important because you get the best out of people. You get the most out of people when they can bring who they are to the workplace.

Geoff Bennett: You write in your memoir that during your professional journey you and your husband faced personal challenges in starting a family and you write about how you suffered from second trimester miscarriages.

And then when you were able to have a child, she died in infancy, Carolyn’s Special K you called it.

Geoff Bennett: Yes, talk to me.

Cynt Marshall: Yes. I named her Carolyn with the K because my mother’s name is Carolyn. And my husband’s name was Kenneth. She was born four months premature. So it was unexpected. And so they said, she’ll live two days, she’ll live six months. And she was there for a reason. Really, I think doctors have learned a lot. We learned a lot, a lot of that. And so the Lord took my baby at six and a half months, it was the most difficult challenge of my life.

Honestly, I ended up lying on the stairs one day when my husband left to see his family after the funeral. And I laid there all weekend. I had the same clothes on when he came home. I just needed to let him out. I couldn’t even bear the grief.

My husband saw me when he came home. And you know, I was always in the same clothes. And he just put his hand down, reached down and picked me up. And this is the story of my life. I think that’s what we have to do for each other, be that hand and lift that person.

Geoff Bennett: And then on top of all that Cynt, in 2010 you were diagnosed with stage three colon cancer. And the way you write about it in the book, I mean, there’s not an ounce of bitterness or resentment. And what stands out is that all of your life experiences up to that point have prepared you for this diagnosis that you had no idea about.

Cynt Marshall: Absolutely. It’s like everything that happened in my life before the end was a set up. And you know, my mom said when I told her I was diagnosed, her first response was, it’s for His glory, it’s for a reason that God will get the glory out of it. She said you will tell this story in a big way one day. And she was absolutely right. There’s a scripture that says sickness doesn’t lead to death. And she kept quoting that too. And here I am, cancer-free, 11 years later.

Geoff Bennett: And then in 2017, you retire from AT&T and you get a call from Mark Cuban, who we’ve interviewed on this show before. And if I understood correctly, you didn’t know who he was.

Cynt Marshall: Don’t judge me, but I didn’t.

Geoff Bennett: No judgment, no judgment at all. Yes yes. So what — so he called you? And what did he ask?

Cynt Marshall: he asked me if I could come in and be the CEO of the Dallas Mavericks and help transform the culture, and really help create a great workplace for well-deserving people who had dedicated their lives and still owe sports . And they weren’t in a great working environment. And some things had happened there. This, you know, came out in an article, and Mark was getting more and more information by the second and realizing that he really needed to make some changes.

And so I’m blessed to have been able to do that. We brought great people with me. And I take no credit for it. Many of us have worked very, very hard to make sure we’re on the right track for you to be a great place to work.

Geoff Bennett: When you entered the management ranks of the Dallas Mavericks, there were no women or people of color in management. How did you talk about transforming this corporate culture?

Cynt Marshall: Right. And so I didn’t have women or people of color on my permanent leadership team, in permanent positions. And so I’ve learned from my 36 years at AT&T the value of diversity, and how that really equates to, you know, profitability, having a diverse group of voices making decisions and looking at things.

And so I promoted some — I brought people with me. So I brought two women with me, at the management level. We promoted others, we hired some people. And now we’re 50% women, 50% people of color, at our leadership table and across the organization. And it matters.

Geoff Bennett: You write about what you call the three Ls of leadership, listening, learning and loving. I was struck by the love part, because it’s not something you hear from a lot of CEOs.

Geoff Bennett: Writing a memoir like this requires an immense amount of self-reflection. What have you learned navigating life’s toughest challenges?

Cynt Marshall: What I learned is that it is also my theme song. So if you ever hear me speak, you’ll know what my song is. And it’s not a high enough mountain. I really learned that while writing this book, there is no mountain high enough to stop people from coming to me to help me climb the mountain and there is no mountain high enough, no goal high enough to prevent me from reaching it. And it’s thanks to all the support I get. Obviously, I am a woman of faith. So I believe the Lord has a plan for me.

But he puts people in my life. My son (INAUDIBLE) wrote a song when I was diagnosed with cancer, and the name of that song is “It’s gonna be okay”. And so I kept thinking about it when I was writing this book at every turn. it turned out everything was fine and so we just have to have that faith and that trust that we can get through this to never give up hope.

Geoff Bennett: Cynt Marshall, the book is “You’ve Been Chosen”. It is a real pleasure to speak with you. Thank you very much for being with us.

Cynt Marshall: Thank you very much for inviting me.

Oil painting turns out to be a wise investment at auction