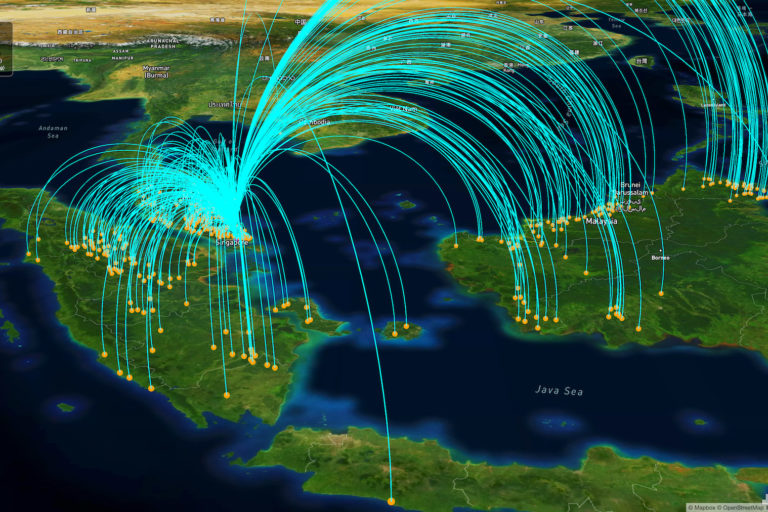 Palm oil is a major driver of deforestation in the two countries which produce nearly 90% of the world’s supply, Indonesia and Malaysia, and whose forests are home to key areas for biodiversity.

A 2019 study shows that land clearing for oil palm plantations was the main driver of deforestation in Indonesia between 2001 and 2016, accounting for 23% of total deforestation.

One of the keys to stopping oil palm-induced deforestation is the ability to trace the palm oil product back to its origin, ensuring it originates and is produced legally in an area free from environmental and social conflict. Known as full traceability, this is a level of transparency that the industry has still not been able to achieve, despite the efforts of bodies like the Roundtable on Sustainable Palm Oil (RSPO). .

“The goal is to make Palmoil.io a self-sufficient and reliable resource for palm oil professionals to identify and mitigate risks in their supply chain,” Leo Bottrill, CEO, told Mongabay and founder of MapHubs.

Monitoring palm oil supply chains has long been a challenge due to their complexity. A ton of palm oil derivative like stearic acid, for example, widely used in detergents and cosmetics, is likely to consist of palm oil from hundreds of factories which in turn , process the palm fruits cultivated by thousands of plantations.

These networks of plantations and factories make it difficult for companies to know exactly where they are sourcing from, down to plantation level, and therefore to provide evidence of compliance. It also makes companies interdependent on each other to ensure transparency.

So even though efforts have been made to monitor palm oil supply chains, they remain fragmented, expensive and uneven, according to Bottrill. And without full traceability, a buying company can’t really tell whether their palm oil is deforestation-free or not, even if they’ve made efforts to establish it, for example by posting a list of factories they buy from.

“Just because you post a plant list, buy RSPO certified palm oil, and maintain a grievance tracking system doesn’t automatically mean you get a good rating,” Bottrill said. “There is still work to be done.”

Palmoil.io aims to rectify this by being the first monitoring system that reflects the reality of shared supply chains in the industry. To do this, the platform collects various data, including map data such as concession boundaries and factory locations, supply chain information from public lists of factories, classification maps of land, reliable and free forest warning technology and widely available satellite imagery.

Palmoil.io analyzes more than 2,000 palm mills, 480 refineries and crushers and 400 high-risk plantations. It also scrutinizes all the major traders, buyers and suppliers of palm oil.

By analyzing such a large number of factories and identifying forest loss within 25 kilometers (16 miles) of the factories, Palmoil.io is able to identify not only whether deforestation has occurred or not, but also what caused it and who caused it.

Besides deforestation, Palmoil.io also tracks factories and suppliers associated with human and labor rights violations, creating a common grievance database containing over 1,400 complaints that are updated monthly. Having this database means that individual companies don’t have to manage their own grievance tracking tools.

“Palmoil.io shows where you need to improve, and perhaps more importantly, allows you to benchmark your performance against that of your peers,” Bottrill said. “Peer pressure could be the most powerful tool we have to achieve this goal of zero deforestation. “

Since launching earlier this year, Palmoil.io has been used by major traders and buyers like Golden Agri Resources (GAR), Pacific Interlink, Olam, and BASF.

In April, Palmoil.io informed major traders and buyers subscribing to the platform that they were at risk of deforestation as they purchased from high-risk factories in Peninsular Malaysia, before the risks of deforestation were widely known. reported.

Bottrill said the Palmoil.io team will continue to update and improve the platform by adding more factories to the database. An upcoming feature will be the assessment of plantations.

“Similar to factories, this will be a list of concessions that will be assessed against recent, historic and future deforestation risks,” Bottrill said. “We will also identify the buyers and the grievances associated with this dealership and this group owner.”

MapHubs is also developing an experimental approach to analyze the risk of deforestation of smallholders, as very few of them have been mapped even though they represent 40% of all palm oil production.

“Despite the many challenges, I am optimistic that palm oil could be the first major commodity causing deforestation to shift permanently to a deforestation-free mode of production,” Bottrill said. “Palmoil.io’s job is to help speed up the ‘might’. “

But for palm oil to be truly deforestation-free, he added, it’s important that all stakeholders are involved.

“It’s not about providing a sustainable supply chain for a particular company or market. It concerns everyone, ”Bottrill said. “There can’t be a lasting market and a leak market – there can only be one market. So whether you’re selling Snickers bars to the Slovenes or cooking oil to the Indians, sustainability has to become an industry standard, not a voluntary luxury. We want Palmoil.io to play an important role in making this happen.

COMMENTS: Use this form to send a message to the author of this article. If you want to post a public comment, you can do so at the bottom of the page.

Giant offshore platform in the North Sea for