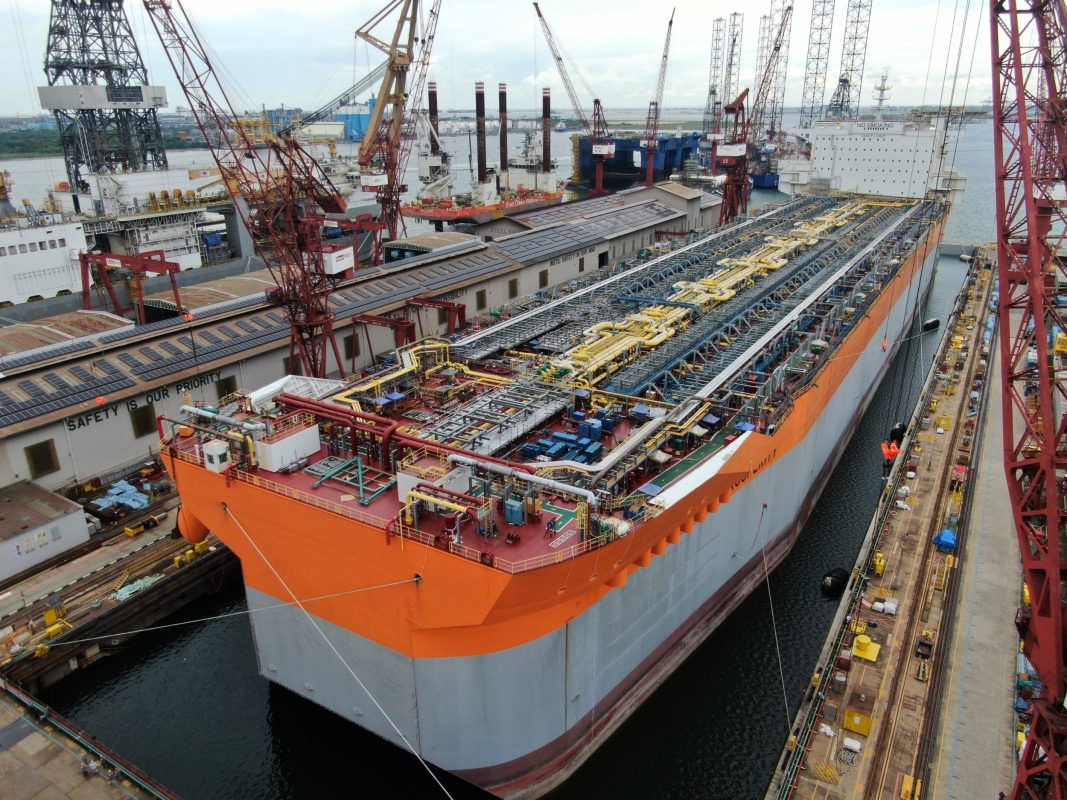 Dutch company SBM Offshore announced on Wednesday that it had won contracts to carry out the front-end engineering and design (FEED) of a floating production, storage and offloading vessel (FPSO) for the Yellowtail oil extraction project in off Guyana.

A statement from SBM says that the award of the FEED contract triggers the initial release of funds by ExxonMobil’s subsidiary, Esso Exploration and Production Guyana Limited (EEPGL) to begin FEED activities and secure a Fast4Ward® hull.

The press release indicates that after FEED and subject to Guyanese government approvals of the development plan, the sanction of the project, including the final investment decision by ExxonMobil, and the publication by EEPGL of the second phase of the work, SBM Offshore will build, install and then lease and operate the FPSO for a period of up to two years. The first oil from the Yellowtail well is expected in 2025.

“The FPSO will be designed to produce 250,000 barrels of oil per day, have an associated gas processing capacity of 450 million cubic feet per day and a water injection capacity of 300,000 barrels per day. The FPSO will be moored at a water depth of approximately 1,800 meters and will be able to store approximately 2 million barrels of crude oil, ”the statement said.

This will be the fourth FPSO that SBM will build for operations in Guyanese waters.

“Building on the experience gained to date on Liza Destiny, Liza Unity and Prosperity FPSOs, SBM Offshore continues to engage in local content development in Guyana through local sourcing of the manufacturing scope. and the integration of Guyanese engineers into the execution and operational teams, ”the company mentioned.

Liza Destiny has been producing oil here since December 2019, The Liza Unity is now in Guyanese waters and is connected to begin extraction next year. The Prosperity, for the Payara well, is now in dry dock in Singapore.

In order to strengthen its execution model given the current difficult market environment, SBM Offshore said in the statement that it has established a Special Purpose Company (SPC) with McDermott for the execution of the turnkey phase of the project. . This SPC will benefit from the combined engineering and manufacturing capability as well as the experience of both companies in providing EPC solutions to the energy industry. SBM Offshore will own 70% and McDermott will own 30% of the capital of this SPC. The FPSO will be 100% owned by SBM Offshore.

“SBM Offshore is proud to announce that ExxonMobil has awarded the contracts for the fourth FPSO to be deployed in Guyana. When completed, the FPSO will be the largest production unit ever built by the Company. This project once again demonstrates the value that our industry-leading Fast4Ward® program continues to bring to our customers and other stakeholders. We are also excited to announce our partnership with McDermott and look forward to working together throughout the execution phase and delivering this world class project. “

The release says McDermott is a leading and fully integrated provider of engineering and construction solutions to the energy industry. Operating in more than 54 countries, McDermott’s local and globally integrated resources include more than 30,000 employees, a diverse fleet of specialized marine construction vessels and manufacturing facilities, the statement said.

The main activities of SBM are the design, supply, installation, operation and life extension of floating production solutions for the offshore energy industry over the entire life cycle. As of December 31, 2020, the press release said the company employed approximately 4,570 people globally, across offices in our key markets, onshore operational bases and the offshore vessel fleet.