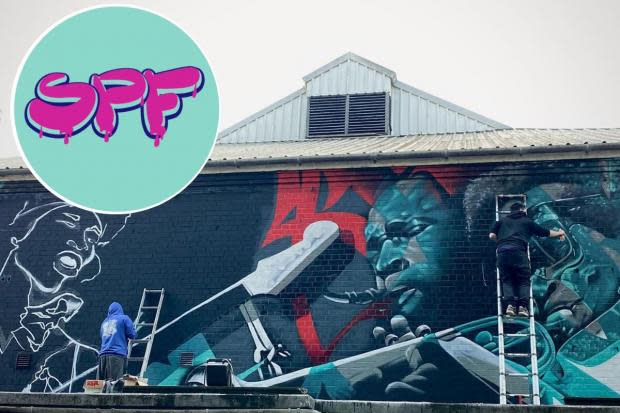 Graffiti artists and mural painters are going to be unleashed on the city as part of the first-ever Swindon Painting Festival.

Various walls will be given a color makeover throughout the weekend of October 15 and 16 in an effort to celebrate and create more murals and streets art as part of the regeneration of the city – as well as to bring about a positive change in people’s perception.

The event is organized by artists Caryn Koh and Sally Taylor and organizer Helen Salter on behalf of Artsite, a self-funded artist-run charity, in partnership with Inswindon BID.

It has already attracted over 50 local and international artists who have been keen to participate in various live paintings and permanent murals in and around Swindon town center and leading into the Rodbourne area.

Due to the scale of the event and the murals, some artists have already started work to allow people to see their work in progress. An example is a mural currently being painted behind the MECA by Ed Poster, The Visual Drop and Jaksta.

The main attraction of the event will be held at Wharf Green, where six star artists will showcase their skills on large frames by painting live to the public over the weekend.

An official art trail map will be posted on the event’s social media sites, prior to the event, so people can find out where each artist is and can see them at work.

There’s an official launch event at Artiste from 6-9pm on Friday, October 14.

The artists will also hold a free interactive experimental drawing workshop for the public to enter the gallery and experiment.

Iconic Swindon artist Ken White, best known for his large-scale murals, will host a free-entry conversation session and open discussion on how public art can play an important role in improving people’s lives. ‘a town.

There will also be exhibitions showcasing the artists’ work and highlighting the history and evolution of street art in Swindon.

If you would like to contribute material, go to gofund.me/4cb6a81c

Near miss on the Hibernia platform off Canada