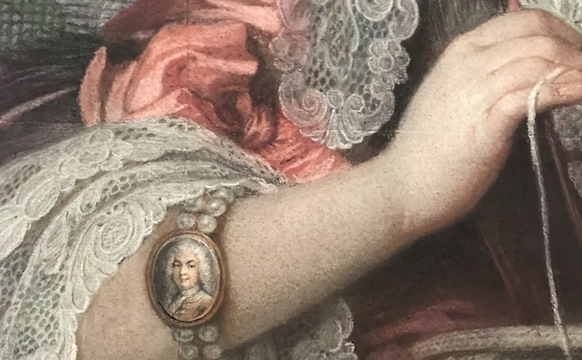 Joseph Cotes, “Portrait of Joseph and his brother John Gulston” (1754), pastel on blue paper, mounted on canvas (all photos by author for Hyperallergic unless otherwise noted)

LOS ANGELES — Portraits of 18th-century European elites are often imposing. Much like the paintings of today’s wealthy, they are meant to be hung in homes with high ceilings and long hallways. But portrait painters working in pastel, a popular medium at the time, faced a unique challenge. Unlike the canvas used for the oil paintings, the paper used for the pastels was available in sizes smaller than typical large-scale portrait orders. Pastels are also a capricious medium, ruthless to errors.

Pastels in Pieces, at the Getty Center, features a small collection of works that circumvent the limitations of their medium. While the artists included in the exhibition are considered “masters” of their time, the works here are notable not just for their subject matter or artistry, but rather for the way in which the artists’ process is revealed. The pastels, assembled from several sheets of paper to form complete portraits, look like puzzles that invite speculation about their creation.

French artist Maurice Quentin de La Tour’s portrait of Louis XV, for example, is a triumphalist painting of a king standing before a besieged city. Looking closer, the king’s face is framed by an uneven outline of paper edges, revealing an extra layer that has been pasted over the torso and armor. Although drawing the face separately from the rest of the work probably saved the king time to pose, the structure of the work also reveals how well the portraits responded to the fashions and vicissitudes of their time. Political successions and military defeats could easily swap the face of Louis XV with another king and the cathedral of Tournai (in the background) with a landmark of another defeated city.

A portrait of two young brothers by the English artist Francis Cotes brings a little lightness to the exhibition, as well as an exercise in contrasts. The eldest brother, Joseph Gulston, poses in a decadent, flowing robe, standing and staring directly at the viewer. To her left is younger brother John, sans panties and posed with a basket of flowers, staring away from the camera and barely containing an impish grin. A vertical seam running down the center of the painting effectively divides the pastel into two paintings, with Joseph’s left hand drawn into John’s frame to create the illusion of continuity. Posed separately, the two brothers reveal their personalities, with teenage Gulston affecting maturity and four-year-old John shedding light on the situation. The artist may also have separated his subjects for more pragmatic reasons, such as the need to separate two restless and quarrelsome brothers.

Diagram of pastels including Charles Antoine Coypel, “Portrait of a Woman Sewing” (1746)

The competition for large portrait commissions required artists working with pastel to match the size and scale of the oil paintings. As the centerpiece of the exhibition, Maurice Quentin de La Tour’s portrait of a French magistrate, patched with 12 sheets of paper, stands nearly seven feet tall and is the largest pastel of the 17th century. If there had been any doubts about the commercial viability of pastel in the artist’s day, this work would certainly have silenced the doubters. It is also representative of the perverse extent to which the elites have spent much of their wealth to preserve their likeness for posterity. Not surprisingly, pastels briefly fell out of favor during the fervor of the French Revolution.

Pastels in Pieces reveals how artists under pressure find quick fixes to thrive under specific material conditions that threatened their livelihood. What has remained unchanged since the 17th century is the need for artists to meet such challenges and to navigate or circumvent the tastes of patrons. While the Getty’s works once represented the whims of a powerful few, they serve as enduring examples of how specific mediums – whether painting, sculpture or dance – respond to the ebbs and flows of their material and political contexts.