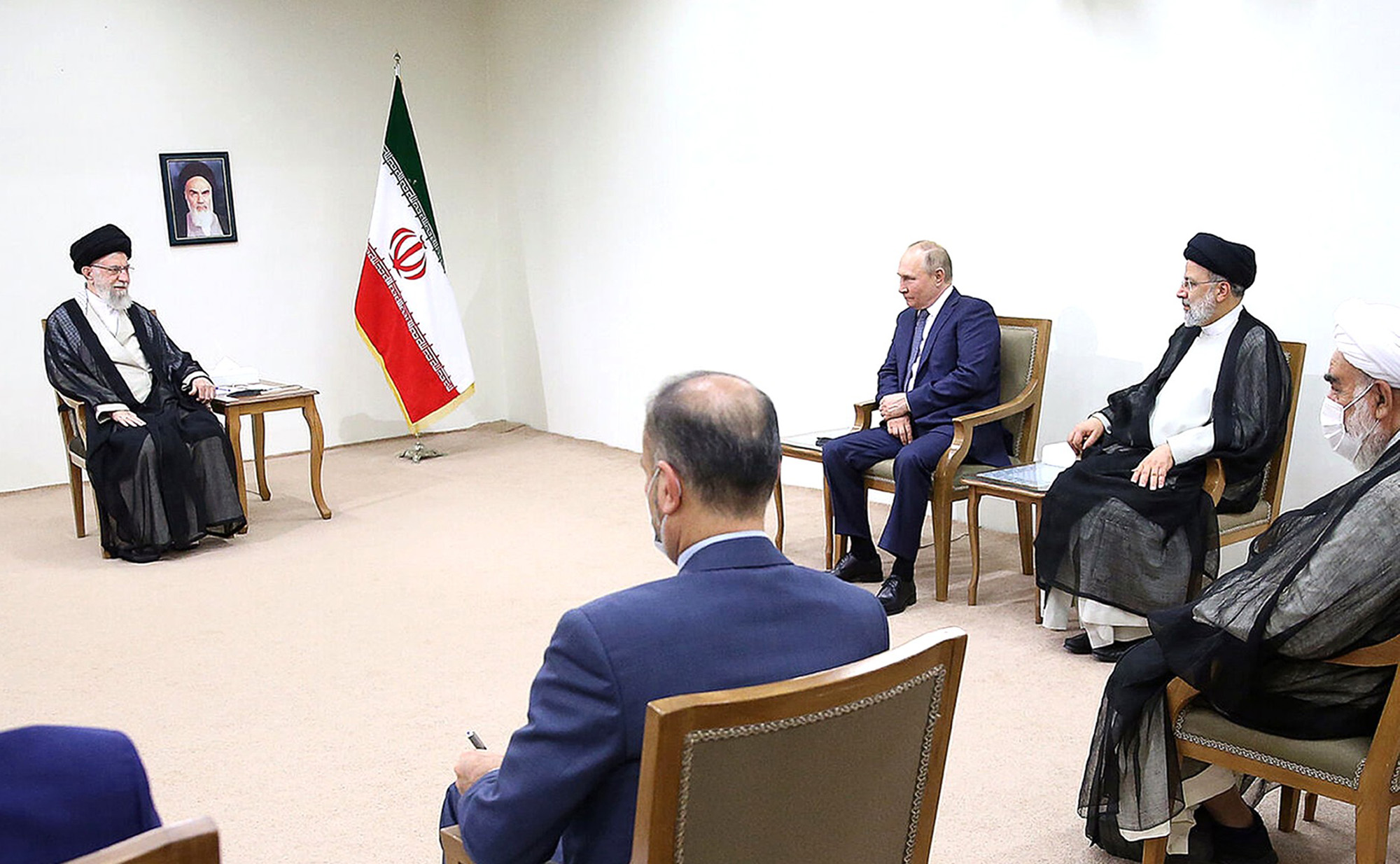 According to the French geopolitical scientist, the Russian-Iranian alliance is strengthening against the background of the war in Ukraine, and Iran could become a platform to circumvent the geo-economic measures taken against Russia.

At present, it is unclear whether the Iran nuclear deal will be renewed, as negotiations stall over inspections of secret sites and new demands from Tehran. It is also certain that such an agreement would not resolve the substance of the question, even less that of the Iranian missiles or of its subversive and destabilizing action, from the Persian Gulf to the Eastern Mediterranean, without forgetting Yemen and the Red Sea. In truth, that is not our goal.

Admittedly, it remains fashionable to deny the reality of a Russian-Iranian alliance. At most, the two countries would be linked by limited and conjunctural interests, against a background of fundamental historical differences, as if history were only an eternal return of the same. And the doxa says that Russia would have an advantage in preventing Iran’s return to the oil and gas markets. On the contrary, observation of the facts highlights the strengthening of ties between Moscow and Tehran.

After first approaches at the beginning of the post-Soviet period (the “anti-hegemonic coalitions” of Yevgeny Primakov), Russia and Iran concluded a strategic partnership in 2001. It took the form of important military contracts -industrial and civil nuclear cooperation that have survived the international sanctions put in place under UN Security Council resolutions, with Moscow’s consent. Even before the signing of the 2015 nuclear deal, Vladimir Putin was delivering S-300s to Iran and Russian generals were planning with their Iranian counterparts a military intervention in Syria, for the benefit of Bashar Al-Assad and the regime. baathist..

In France, the Russian party and its “useful idiots” explained that Putin’s intervention would make it possible to combat Sunni jihadism, to replace the Syrian raïs with a more acceptable personality and to push back the Pasdarans (the Guardians of the Islamic Revolution ) and the Panshiite militias dispatched to this theater by Tehran. In short, a martingale! In fact, the Iranian regime was able to establish a permanent foothold in Syria and build a “land bridge” (the “Shia arc”) across the Middle East.

Despite the inevitable frictions and rivalries in the division of the booty, it is therefore a Russian-Iranian alliance that has emerged on the ground, with combined operations between the Russian air force and the Iranian-Shiite ground forces. . Since then, an intelligence and counterintelligence pact has completed this alliance (2021). The redeployment of part of the Russian expeditionary force to the Ukrainian theater even opens up new fields of action for the Pasdarans, who are much more present in southern Syria, which worries Jordan as much as the State of Israel..

Some would like to believe that the hypothetical return of Iran to the hydrocarbon market, after the possible signing of a new nuclear agreement, would worry Putin and his deputies. Conversely, this return would increase the room for maneuver of the West, faced with the energy war waged by Moscow (Nord Stream was supposed to be a commercial project: “Wandel durch Handel”!).

Seen from Moscow, the geopolitical stakes are global and go beyond the sole question of oil exports: Iran is a key link in the chain of revisionist and disruptive powers; the strengthening of ties with Tehran opens up broad prospects beyond the Middle East.

As for Shiite jihadism, it is not soluble in the black or white gold market. Evidenced by the incessant desire to develop a nuclear program, against Iranian economic interests. In this area, Barack Obama’s prognosis was based on a philosophy of the history of the poor, marked by economism (the axiomatics of interest).

During Putin’s visit to Tehran on July 19, Ayatollah Ali Khamenei, Supreme Leader of the Islamic Revolution, and his factotum, President Ebrahim Raissi, justified the military aggression of Russia in Ukraine and denounced NATO, considered in Tehran as the cause of evil. The Kremlin’s propaganda is taken at face value, not out of conformity, but because it fits the ideological DNA of the Iranian regime and the millennial vision of men who monopolize power.

We then learned that a new Russian-Iranian strategic agreement was under study, with cooperation between the two capitals to include the spheres of banking and finance in the future.. Gazprom and the National Iranian Oil Company have already signed a contract for the development of Iranian hydrocarbon fields, worth 40 billion dollars. Already envisaged in the 2000s, the project of a “gas OPEC” is also returning to the field.

In the weeks that followed, the forms of this Russian-Iranian alliance were accentuated. On August 9, Russia launched from the Baikonur cosmodrome in Kazakhstan an Iranian-made satellite (the Khayyam satellite). Theoretically intended for civilian use, this satellite probably has a military vocation. According to some analyses, he could contribute to the Russian military effort in Ukraine (if there is still time).

The same month, Jake Sullivan, Security Advisor to the President of the United States, informed us that the Russian government was planning to buy drones from Iran (Mohajer and/or Shahed drones). From August 29, planes flew these devices to Russia, their shortcomings and the necessary adaptation to the Russian military system explaining why they have not yet been observed on the battlefield. Since then, Iranian leaders have admitted that they are considering the purchase of Su-35 fighter jets (see the remarks of the head of the Iranian Air Force, General Hamid Vahedi).

However, the main problem is elsewhere. In the case of a new nuclear agreement with Iran, the lifting of sanctions and limitations that hamper the country’s economic and financial apparatus, controlled by the Pasdarans and Islamic foundations, would be a boon for Russia. Putin and his supporters could use Iranian territory as a platform to circumvent Western geo-economic measures, with the Iranian ally also bringing undeniable know-how in this field..

The tightening of the Russian-Iranian alliance is part of a broader perspective, that of a bloc of revisionist and disruptive powers in the Old World. On the horizon, the swing towards the East and the emergence of a world centered on the Sino-Russian axis. That, at the very least, is Putin’s geopolitical scheme, which he explained at the Eastern Economic Forum (EEF) in Vladivostok on September 7.. This discourse is in line with the theses of Alexander Dugin, the popularizer of eurasism in Russian military and security circles.

Regardless of whether a new iteration of the 2015 nuclear deal would not be an adequate response to the Iranian threat and the risk of a proliferation cascade, it is possible that the Biden administration will have to quickly reinstate sanctions in order to enforce the measures taken against Russia. There would then be no lack of “realists” and tyrannical thugs to cry out against American inconstancy.

All of this remains hypothetical (nothing has been signed) but it is important to take into account the different facets of the Iranian “file” and to anticipate the consequences of such an agreement. Without forgetting that a Russian defeat in Ukraine and the geopolitical shock it would cause would also be an object lesson for Iran and its main client, the “great disruptor” China. It is not impossible. It’s even within reach. So many reasons not to give up, on the Iranian nuclear issue as in Ukraine and the Taiwan Strait.