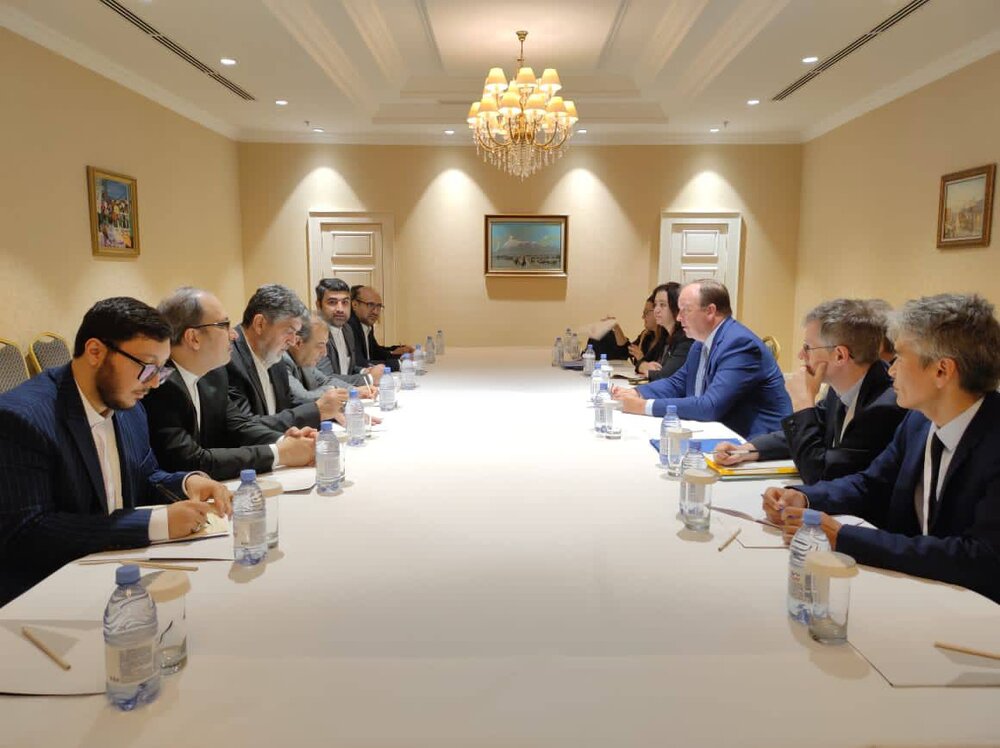 The Iranian diplomat met with Turkish and UN officials on the sidelines of the conference. Khaji and his entourage met with the Turkish delegation at the 18th Astana Platform Conference. During the meeting, Khaji reviewed the latest political and on-the-ground developments in Syria, according to Iran’s Foreign Ministry.

The senior adviser to the Iranian Foreign Minister stressed that Syria’s territorial integrity and sovereignty are untouchable.

He also referred to the illegal presence of the United States east of the Euphrates. Khaji called for an end to the plunder of Syria’s natural resources as well as Washington’s discriminatory behavior and refusal to lift anti-Syrian sanctions. The Iranian diplomat then stressed the need to lift all sanctions against Syria without any political preconditions or discrimination.

Khaji also condemned the Zionist regime’s growing aggression and said Iran was concerned about the continued Israeli attacks on Syria.
During the meeting, both parties reaffirmed the need for a commitment to the preservation of the territorial integrity and sovereignty of Syria.

On the second day of the 18th Astana Platform Conference in Nur Sultan, the UN delegation met with Khaji and his entourage. The two sides discussed the latest developments regarding the political settlement of the Syrian crisis as well as the Syrian Constitutional Committee and the humanitarian aspects of the crisis.

The Senior Advisor to the Iranian Foreign Minister highlighted the latest international developments and called on the international community as well as the UN and its specialized agencies to pay more attention to the humanitarian aspects of the Syrian crisis. Khaji also demanded an increase in aid to the Syrian people without any political preconditions or discrimination.

He criticized the discriminatory behavior of the United States regarding the sanctions and called for the immediate lifting of all bans imposed on Syria.

Khaji then welcomed a general amnesty declared by the Syrian president and described it as a positive step towards confidence-building and as a sign of the Syrian government’s positive approach towards the peaceful resolution of disputes.

At the end of the Astana platform conference, Iran, Turkey and Russia issued a joint statement on Syria. They “reaffirmed their unwavering commitment to the sovereignty, independence, unity and territorial integrity of the Syrian Arab Republic and to the purposes and principles of the Charter of the United Nations and stressed that these principles were to be universally respected and respected”.

They “reviewed the latest international and regional developments and underscored the leading role of the Astana Process in the peaceful resolution of the Syrian crisis” and “expressed their determination to continue working together to combat terrorism in all its forms and manifestations and to oppose separatist programs aimed at undermining the sovereignty and territorial integrity of Syria and threatening the national security of neighboring countries, in particular through attacks and cross-border infiltration.

They “condemned the increased presence and activities of terrorist groups and their affiliates under different names in various parts of Syria, including attacks targeting civilian facilities that result in the deaths of innocent people. Stressed the need to fully implement all arrangements related to northern Syria.

The Astana format guarantors “reiterated the need to continue their ongoing cooperation in order to ultimately eliminate DAESH/ISIL, the Al-Nusra Front and all other individuals, groups, companies and entities associated with Al-Qaeda or DAESH/ ISIL, and other terrorist groups, as designated by the UN Security Council, while ensuring the protection of civilians and civilian infrastructure in accordance with international humanitarian law.

They also “expressed grave concern over the presence and terrorist activities of ‘Hayat Tahrir al’Sham’ and other affiliated terrorist groups designated by the UN Security Council which pose a threat to civilians in the ‘inside and outside the Idlib de-escalation zone’.

Iran, Russia and Turkey “examined in detail the situation in the Idlib de-escalation zone, agreed to exert further efforts to ensure lasting normalization of the situation there and improve the humanitarian situation in and around the area. Stressed the need to maintain calm on the ground by fully implementing all agreements on Idlib. “They “discussed the situation in northeast Syria and agreed that security and continued stability in this region can only be achieved on the basis of the preservation of the sovereignty and territorial integrity of the country Rejected all attempts to create new realities on the ground, including self-rule initiatives illegitimate under the pretext of fighting terrorism.

The delegations of the three guarantors “reaffirmed their determination to oppose separatist agendas east of the Euphrates aimed at undermining the unity of Syria as well as threatening the national security of neighboring countries”.

They “declared their grave concern, in this regard, at the escalation of hostilities and all forms of oppression exercised by separatist groups against civilians east of the Euphrates, including the repression of peaceful demonstrations, the forced conscription and discriminatory practices in education” and “reiterated their opposition to the illegal seizure and transfer of oil revenues that should belong to Syria. Condemned the actions of countries that support terrorist entities, including illegitimate autonomy initiatives in northeast Syria.

Iran, Turkey and Russia “condemned the continued Israeli military attacks in Syria which violate international law, international humanitarian law, the sovereignty of Syria and neighboring countries, endanger stability and security in the region and called for their cessation”. They expressed “their belief that there can be no military solution to the Syrian conflict and reaffirmed their commitment to advancing a viable and lasting political process led and controlled by Syria and facilitated by the United Nations, in accordance with resolution 2254 of the UN Security Council”.

They also “underlined the important role of the Constitutional Committee, created thanks to the decisive contribution of the guarantors of Astana and in application of the decisions of the Syrian National Dialogue Congress in Sochi; in promoting the political settlement of the Syrian conflict.

They “took note of the convening of the 8th round of the Drafting Commission of the Syrian Constitutional Committee from May 30 to June 3 in Geneva and welcomed the announcement of the holding of the next round from July 25 to 29” and “ called for holding the next session with a constructive approach from the Syrian parties. In this regard, reaffirmed their determination to support the work of the Committee through continued interaction with the Syrian parties in the Constitutional Committee and the Special Envoy of the United Nations Secretary-General for Syria Geir O. Pedersen, as facilitator, in order to to ensure its sustainable and efficient operation.”

They also “expressed the belief that the Committee, in its work, should respect the Terms of Reference and the Rules of Procedure to enable the Committee to implement its mandate of preparing and drafting for the popular approval of a constitutional reform as well as to advance its work and be governed by a sense of compromise and constructive engagement without foreign interference and externally imposed deadlines aimed at achieving general agreement among its members.