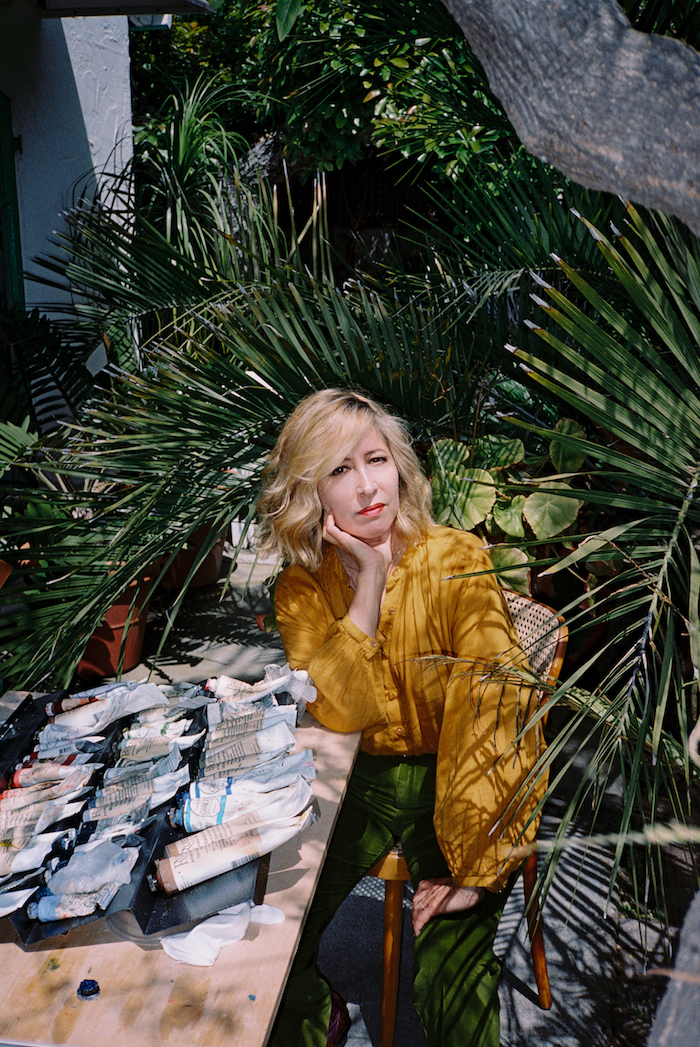 By setting out to create the cover of his new book, The new oil painting, a definitive guide to materials and techniques for oil painters, Kimberly Brooks found herself spinning in the midst of the void of the abstract.

“I was looking at all those old oil painting guides and the covers are just hideous,” the artist told me on a hot day in his naturally lit Venice studio. She is surrounded by her works, each representing the beginnings of a landscape, at least in my mind, but more precisely, a whirlwind of a brush. “For oil painters it is shocking how little design sense they had. “

His goal in his explorations was above all to create an inspiring blanket; one, she says, hopes it “will embolden the viewer with the power of the blank canvas.” To do this, she discovered that she had to move away from the narrative structure and go into the abstract, which she hadn’t done before.

“I always wanted to paint in an abstract way,” she tells me, gently recounting the story of the first time she was pushed into the arts. It was none other than that of Kazimir Malevich White on white, a painting which she describes as “too difficult to explain”, but which aroused in her an emotion according to which “all the bets were on”.

Brooks’ previous works are as elegant as they are multidimensional – one can easily assume that she is both a writer and a painter, as the narrative structure emerges with every brushstroke. We can hear every detail of the well-crafted story she tells us, as she sheds light on the past, present, and future of her subjects.

“Most artists of all kinds, when they start out, start by spitting out an autobiography before they can really speak because they use the medium to explore themselves. So one of my first shows was called Mom’s Friends, which was my way of understanding the medium, through myself.

From there, Brooks finally began to subtract from the canvas. First of all, people have disappeared from his works. Yet despite this, the narrative magnetically sought its way through the forms. She discovered that “an interior space, in many ways, is still a portrait. No matter how I took people, there was always a story in there.

As the pandemic isolated us all, Brooks found herself both invigorated by the arts and more invested in them. After her book was finished, she focused on the cover and began to explore ways to get to the essence of a stroke.

“It makes sense,” she said to me, standing in front of her works, “the more I can separate my mind in painting, the closer it gets to being truly pure.” She laughs: “I guess the abstraction became the result of a subtraction, where every aspect of my life was simplified during the pandemic. And so I could finally calm all these other narratives down and focus on the task at hand. “

Upon closer inspection, the cover of his book comes to life – it’s a wave, no, it’s a streak of blue in the sky, vanished in an instant. Brooks leaves narration to the viewer, and in doing so, creates a work that mirrors our desires: in many ways, that’s what we want it to be.

This is his hope: “To achieve a certain singularity with painting. It’s a goal she recognizes as Sisyphus, but it motivates her nonetheless.

It’s also good for me, and with her book in hand, I feel ready, inspired, invigorated to create, even if the goal always remains just out of reach.

Want more culture? Register to receive the Cultured newsletter, a bi-weekly guide to what’s new and next steps in art, architecture, design and more.

Of course, we can be close friends. Unfiltered access awaits you.