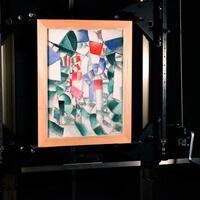 Art experts in the Netherlands said yesterday they discovered an important painting by French cubist Fernand LÃ©ger which had been hidden for more than a century on the back of another canvas.

The unknown work “Smoke over the Rooftops”, believed to date from 1911-12, was the reverse of “Bastille Day”, made a year later, according to conservation specialists Studio Redivivus.

Partially damaged and covered with a layer of hard glue during its lost years, it is now meticulously restored and reveals a â€œturning pointâ€ in the work of LÃ©ger, a Parisian contemporary of Picasso.

The work is believed to be part of a series in which LÃ©ger painted the view from his studio over the rooftops of Paris towards Notre-Dame, repeatedly focusing on the smoking chimneys.

Dutch art historian Sjraar van Heugten said only seven of the series survive, and the new work shows “tremendously significant” advances in LÃ©ger’s use of color and abstraction.

But Duchene was killed in World War I, and although the painting remained in his family, the ‘sad memories’ meant it was never displayed and ‘remained undiscovered for years’, Van said. Heugten.

â€œBastille Dayâ€ was later purchased from Duchene’s heirs in 1999 by the Triton Collection, a private art foundation that still holds the painting.

He discovered that there had been some sort of restoration to the rear, probably in the 1990s, but it was unclear when and by whom and in any case it had simply caused further damage.

The mystery of what exactly was on the back remained largely untouched, even though “Bastille Day” was shown in multiple galleries.

“It was covered to a large extent with a white-grey material and collectors had been told that was really nothing to worry about, that it was not important,” Boeve-Jones said. .

But the enigma continued to intrigue Boeve-Jones, who moved from the United States to the Netherlands to work at the Rijksmuseum in Amsterdam before setting up his own studio.

“When I was doing a health check…I saw some of this that was on display, and I thought wow, that looks amazing,” Boeve-Jones said.

In 2016, the owners asked her to inspect more and Boeve-Jones, who says she had “known Leger all my life”, became a detective poring over the internet and through art publications.

Eliminating the glue-like material then made it easier to see the distinctive shapes and colors underneath, especially the billowing smoke.

“It wasn’t that hard to see that he kind of belonged in the Rooftop Smoke series,” she said.

High-tech imaging techniques examining paint layers and frame damage then allowed his team to restore the paintwork to its former glory.

The significance of the painting quickly emerged, placing it as a “great leap” from LÃ©ger’s darker earlier works to the more abstract and colorful style that the series pioneered.

“It’s not just that the painting was concealed, it’s interesting to some extent, but what we found out is what role it must have played in its journey,” Boeve-Jones said. .

Experts were sure it was a real LÃ©ger because of the provenance, the brushstroke and even the â€œstretchâ€ of the canvas that bears his signature.

“It says Leger everywhere,” she said.

Van Heugten, previously head of collections at the Van Gogh Museum in Amsterdam, said he was “very surprised by the quality” of a once feared work that was “irretrievably damaged”.

â€œIt is a magnificent painting and I am very happy that the restoration was such a success,â€ he said.

The newly discovered painting is on display at the Kroller-Muller Museum in the central Netherlands as part of a rooftop series exhibition from November 19 to April 2, 2023.

It will be displayed in a display case that will allow viewers to see both sides.

UN accused of allowing Coca-Cola to 'greenwash' during COP27