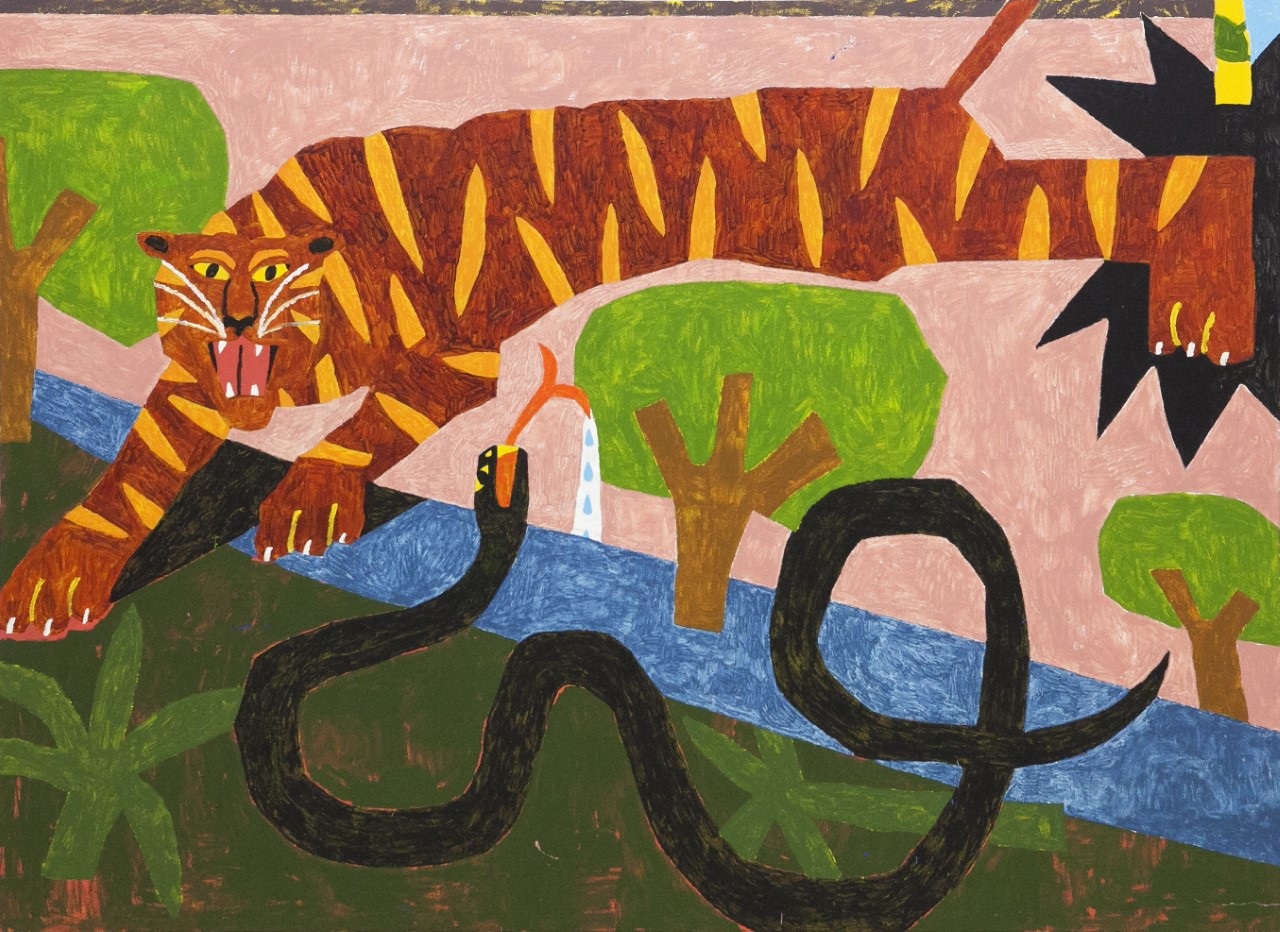 Cannon Dill was the kid who always had paint on his hands. Even today, as an adult, making art is really the only thing he can focus on. “I’m a very quiet person – too quiet for retail jobs and too anxious for office work,” he told 48hills. “Art has always been my thing, it makes sense to me.”

Many random things inspire Dill, including the solo exhibition at Oakland Point. 2 Gallery runs until February 4 â€” to paint: compositions, colors, animals, other painters, friends â€” and his wonderful girlfriend, he would like to add. What motivates him to keep creating works of art are the goals he sets for himself. Dill loves achieving these goals and the sense of accomplishment it brings. It’s important to him to be able to look back on older work and appreciate the effort and time that went into creating it.

He describes his work as “crispy”, referring to the way he works with paint â€“ a kind of textural mark and quick paint that looks sloppy, but has a sharp aesthetic. Some have called his work naÃ¯ve or childish, but for Dill, doing the work is a primary act.

“Sometimes the canvas is so textured it’s hard to even make a single brushstroke,” he said. “I almost have to beat the canvas like a drum with the brush to make it look good.”

Dill occasionally picks up chunks of paint from the floor and throws them at a work in progress. He used paint can lids to â€œsandâ€ the paint off a canvas to give it grain. Whatever its manifestation, its method is intuitive and spontaneous. Scale is also an important element for Dill, probably a holdover from his experience painting public murals. He finds working on a large scale very liberating, while demanding his physical presence and movement with the canvas.

“There is something very striking for me in front of great works”, he said. “It just takes over.”

Dill has lived in the Bay Area since he was 10, mostly in Marin County, though he’s spent a lot of time in San Francisco and the East Bay, and recently in West Oakland. But since the pandemic, the artist has been in a makeshift office-studio in Los Angeles that overlooks a field of agaves. It’s much smaller than his downtown Oakland studio above the pt. 2 Gallery, but it’s quieter and the area is full of birds. The only other sound you’ll hear from his studio is music (mostly jazz) playing in the background, which helps drive his work forward and keeps him in a focused groove.

When it comes to subject matter, Dill oscillates between painting animals, random objects, and human portraits, adding contrasting elements that mirror each other well. In a recent painting, for example, Dill pairs eels with perfume bottles, finding a symmetry that is both comical and lyrical. When something doesn’t look right to the artist, he paints over it immediately. He feels that errors are necessary in the process to arrive at the finished piece.

â€œMuch of what I paint is pure chance,â€ he said. “It doesn’t come from long thinking, it’s just a quick swipe that feels like the right choice and then I’ll paint it.”

Besides being an artist at work, Dill enjoys taking up space in his studio and experiencing nature. Surfing helps him a lot when he gets carried away working on a track. But he still has one foot in the studio, thinking of ideas for new and ongoing work.

He, like most of us, is struggling to ride the waves of different quarantine phases, though he credits the lockdown’s enforced physical distance from events and people for helping him reorder priorities. and to cut certain impasses. On the other hand, not being able to talk about art with other artists and exchange ideas left him in a vulnerable state.

“Having this immediate artistic community is crucial when you have doubts”, he said. “It’s kind of a motivational boost.”

Luckily, living with her partner filled that gap. Having someone to brainstorm and critique work with has been a blessing for Dill during times of isolation. In-person contact with other artists’ work was something else that was missed in his creative experience. Dill went to the Yoshitomo Nara show at LACMA in 2021. It was the first exhibit he had seen in over a year.

“I remember walking in and being like, ‘Oh yeah, this is what art looks like,'” he said. “I had forgotten the importance of being face to face with solid work.”

In addition to Dill’s solo exhibition at pt.2 Gallery, he has another at the end of the summer at Australia’s Piermarq Gallery, which will be his second exhibition in this space. The painter is also working on a children’s book with a friend. He tries to keep up. For other creatives (and probably, as advice to himself), Dill offers these words of wisdom: â€œDon’t get discouraged, it’s normal to have extreme doubts. If you’re an artist, or a writer, or whatever your line of work is, just keep moving forward.

Folklore and dreams woven into magic on canvas