Well adapted ! Queen Letizia of Spain looks stylish in a pastel jacket and pants and a slick ponytail as she visits an exhibition to mark Unicef’s 75th anniversary

By Claire Toureille For Mailonline

She is known to recycle looks, but Queen Letizia of Spain has shown that she is also a master of casual chic for an event in Madrid today.

The mother-of-two, 48, went to a meeting with the Abertis Foundation before heading solo to the Unicef ​​75th anniversary exhibition in the Spanish capital.

Her locks were tied in a ponytail that revealed a pair of chunky hoops.

The blue suit was a nod to the blue colors of the United Nations Children’s Fund, which is responsible for providing humanitarian aid to children around the world, and was founded in December 1946. 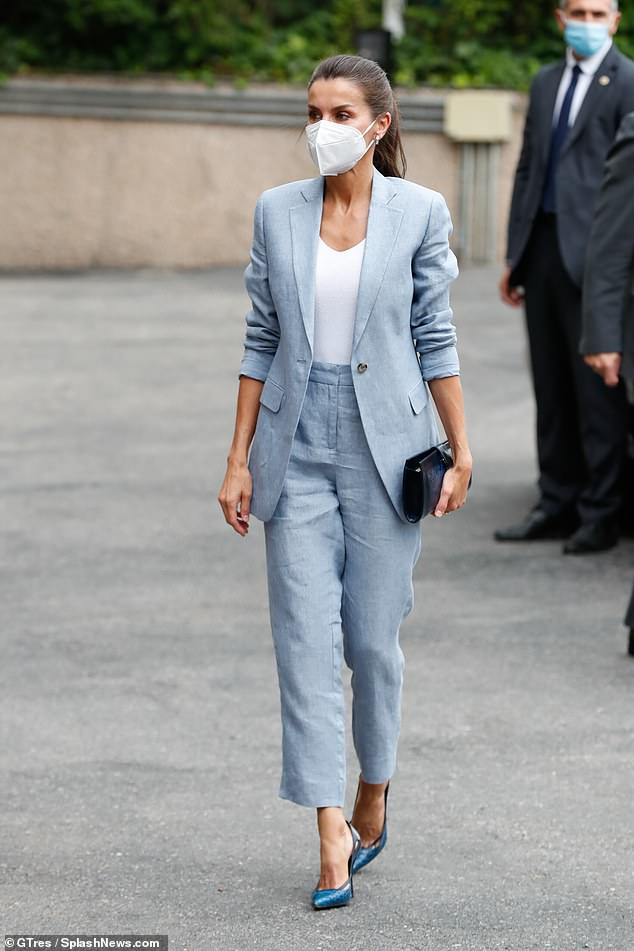 The stylish mother-of-two opted for a blue linen suit from Spanish designer Adolfo Dominguez, which she paired with shoes and a bag from Magrit that she first wore in 2018.

She amplified the cool factor by rolling up her sleeves up to the elbows.

Underneath, to keep the look casual, she wore a white t-shirt that had tucked into her pants.

To brighten things up, she accessorized snakeskin pumps in black and colbat blue and a matching Magrit clutch which she launched in April 2018. 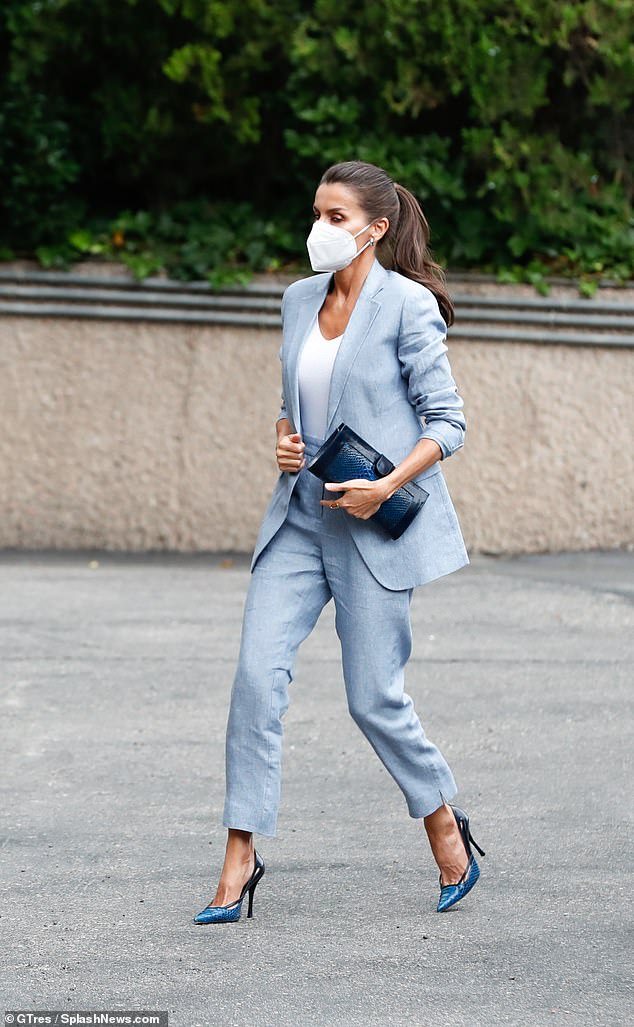 Queen Letizia of Spain, 48, stunned in a chic and relaxed look as she traveled to meetings with the Arbetis Foundation in Madrid today, before visiting the exhibition marking UNICEF’s 75th anniversary

She wore little jewelry apart from the silver hoops and her favorite gold ring on her index finger, which complemented her look nicely.

Her hair was tied back into a high pony, emphasizing her high cheekbones.

Turn up the volume ! Letizia paired the pastel suit with Magrit’s heels in a shade of dark blue to add a pop of color to her outfit. 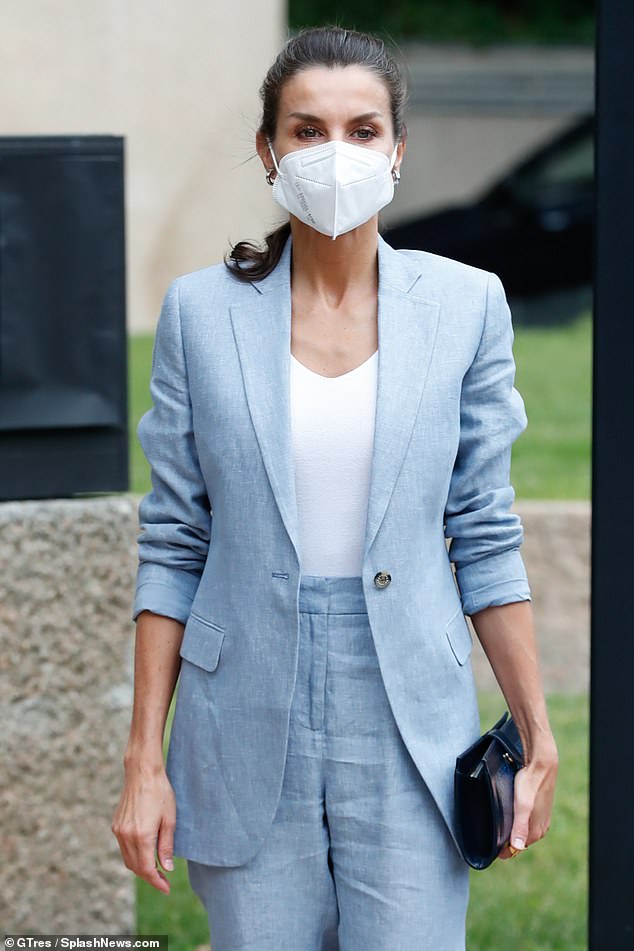 She sported her signature smoky brown eyes, and a well-placed highlighter stroke drew attention to her cheeks.

Letizia, who is honorary president of the Spanish UNICEF committee, attended an exhibition marking the organization’s 75th anniversary. 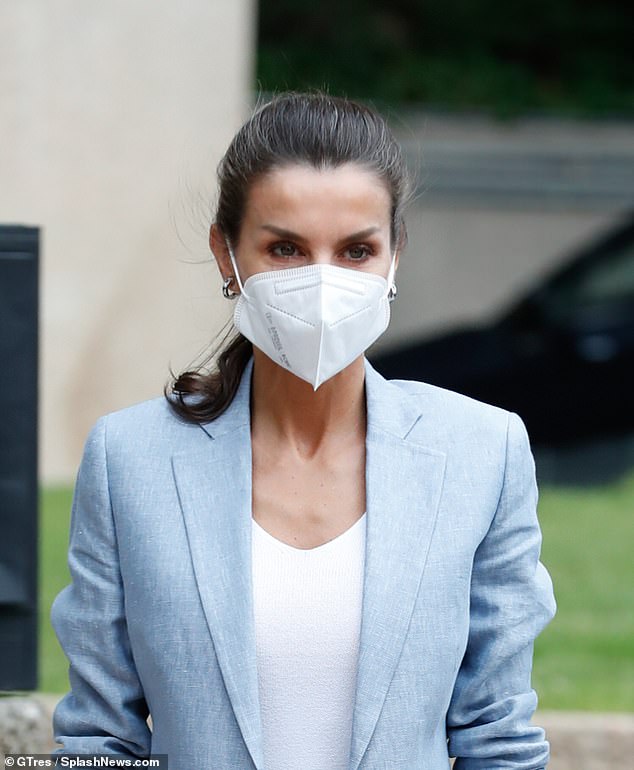 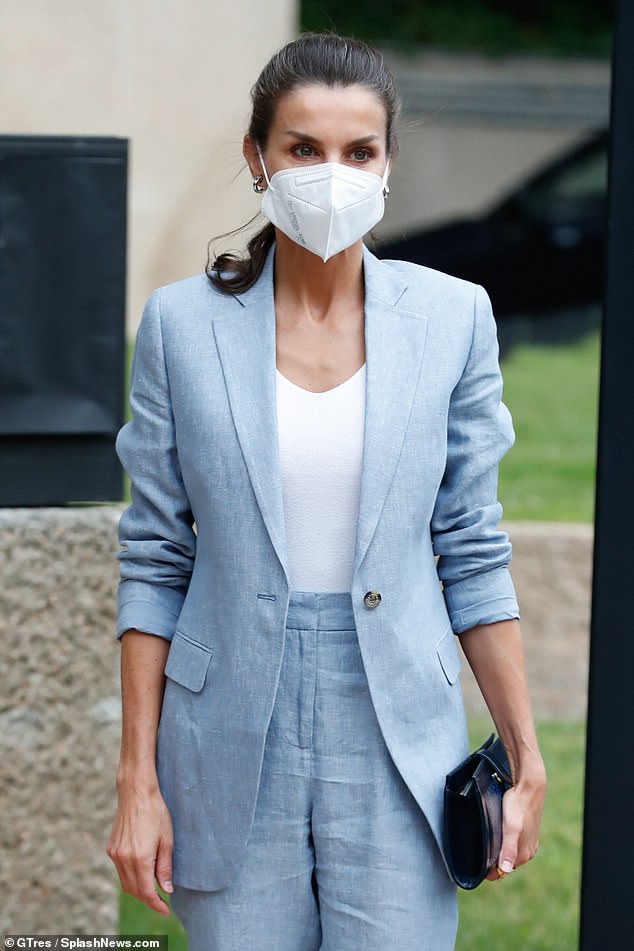 The mother-of-two wore a face covering that complied with Spain’s coronavirus regulations, in the photo

Over the weekend, she presented a summer exhibition joining her husband, King Felipe VI, to host the lunch of United Nations Secretary-General Antonio Guterres at the Royal Palace in Madrid.

The mother-of-two recycled an embroidered Carolina Herrera dress for the occasion, which she first wore when she attended a conference in Palma, Mallorca, on September 25, 2017.

Typically elegant, the royal accessorized the same pastel pink clutch, but decided to replace her previous neutral shoes with matching pink stilettos, which complemented the colors of the floral design of her blue dress perfectly.

She wore classic makeup, with just a touch of bronzer and a smoky eye, and adhered to government guidelines by covering her mouth and nose with a face mask. 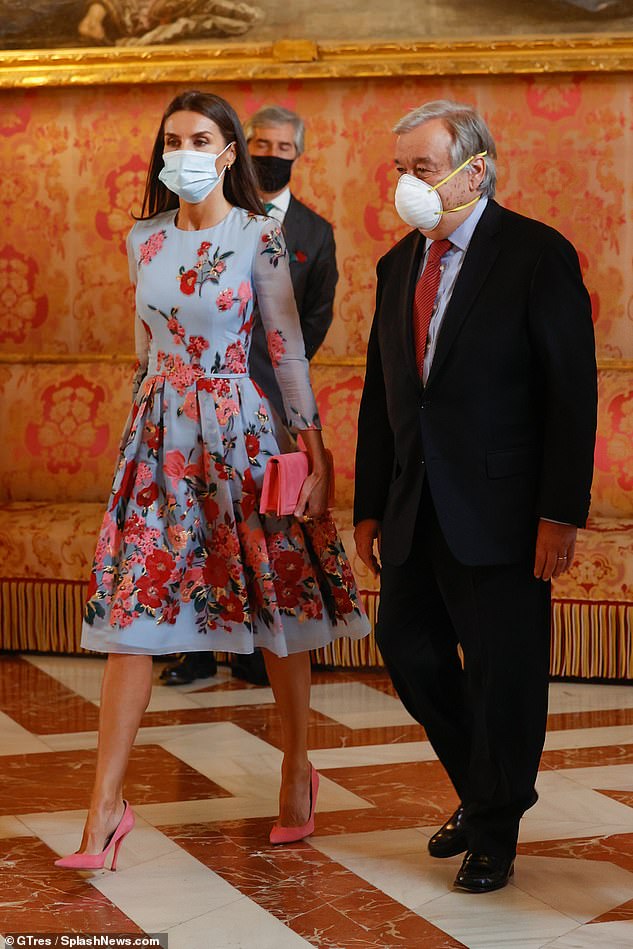 Queen Letizia of Spain presented a summer exhibition by hosting the lunch of United Nations Secretary-General Antonio Guterres at the Royal Palace in Madrid. In the photo, together