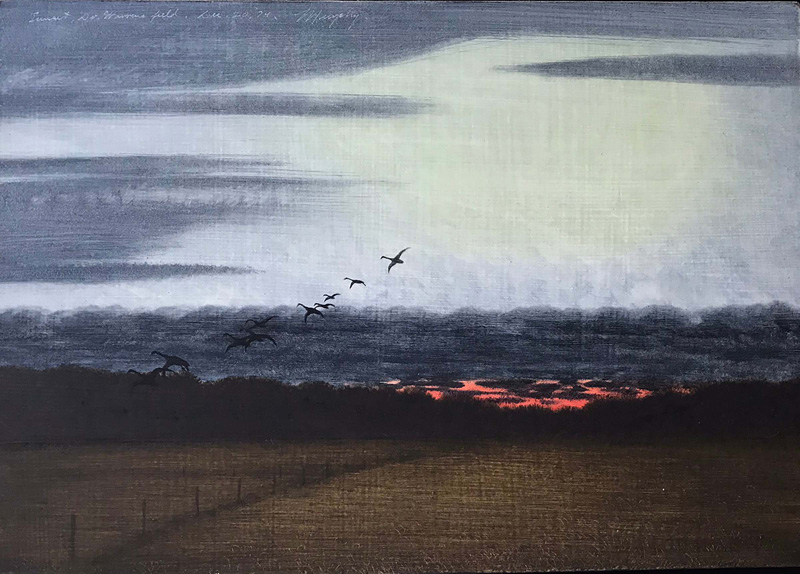 When Stan Murphy passed away in 2003, the island lost not only a brilliant artist, but also a beloved longtime member of the community who immersed himself in Vineyard life. Throughout his illustrious career, Murphy has captured many aspects of the island – from landscapes and flowers, to portraits of local farmers and fishermen, to commissions from some of the vineyard’s best-known residents and visitors. .

Last summer, Martha’s Vineyard Museum hosted a major multi-gallery exhibition dedicated to Murphy’s work. Dozens of paintings, drawings, sketches – even the one and only duck decoy the artist has ever sculpted – were on display for two months, drawing throngs of visitors.

Now, for the first time since the artist’s death, the Louisa Gould Gallery in Vineyard Haven is holding a sale of Murphy’s work in a small solo exhibition. The 12 works on display come from the collections of Murphy’s children, David and Laura, who have selected pieces representing a range of subjects and mediums from the renowned artist’s six-decade career.

The collection includes a magnificent landscape of the field behind Murphy’s former Chilmark house, half a dozen portraits and five nudes (one color painting, three charcoal sketches and one pencil drawing). Of the latter, Murphy’s son David notes that his father periodically drew or painted nudes and hung them in his home. “When I was little, my friends would come and they would try to look away,” he says. “As they got older, their reaction was more of the larval variety.” One of Murphy’s nudes hung in the Black Dog Tavern for many years.

Among the portraits on display at the Louisa Gould Gallery are two of Murphy’s paintings depicting local shopkeepers. In his heyday as an artist, he earned a well-deserved reputation as a master of his art for his landscape paintings and, in particular, for his iconic oils of local farmers, fishermen and other types of salt of the earth.

Other portraits include that of a fiercely determined Captain Ahab from the novel “Moby Dick”, a full-length portrait of the famous dancer Martha Graham, captured in profile wearing a long orange-red dress; and a very thoughtful image of Robert Weaver, who served as the first US Secretary of HUD (Housing and Urban Development) from 1966 to 1968, making him the first African American to be appointed to a US Cabinet level position.

David explains that the portrait was commissioned at a time when many members of the Johnson administration were spending summers at the vineyard. The portrait never went to the intended recipient since, as David recalls, “[Weaver’s] woman hated it because there was no iconography of power. I think it was my dad’s drastic action to omit any official insignia or other sign of his position.

Instead, Murphy chose to depict Weaver aristocratically, wearing a crimson tuxedo jacket and holding a cigar in his skillfully rendered clasped hands.

Perhaps the most notable piece of the show is a portrait of jazz legend Louis Armstrong. “My father worshiped Louis like a god,” David says. “He loved his music.” Through an island connection, Murphy was introduced to Armstrong and was allowed to draw studies for the portrait in Armstrong’s home in Corona, Queens. The resulting image is a moving rendering of Armstrong gazing upwards, with his trumpet barely visible in the left corner. It’s a remarkably intimate portrait of an artist who clearly revered his subject.

Murphy took the painting he made of the house of a prominent islander, seeking commissions to paint the houses of wealthy people. He went door to door on the long dirt road from Tashmoo. All said no, except at the very last house, where the owner agreed. It was Chip Chop, owned by Broadway star Katharine Cornell, and she loved the painting so much she paid double her price for it. Cornell became a lifelong patron and friend, introducing him to Adele Levy, daughter of activist philanthropist Julius Rosenwald. Levy took a keen interest in the young artist and gave Stan a stipend of two years of income, during which he could devote himself solely to art. In a previous MV Times interview, Stan said, “That’s what made me as an artist.”

This early start enabled the artist to eventually establish his own gallery in a small outbuilding on the family property in Chilmark. David notes that his father wanted to go it alone, as he resented galleries for profiting from his hard work. It was a wise move, as at first Murphy’s output was limited. “He only opened the gallery once every two years on average,” explains David. “There were collectors who planned their trips to the vineyard around the openings of the gallery.”

Eventually, Murphy was able to work faster once he switched from heavier type oil paints to lighter paints. He also experimented with acrylics, encaustics, pencils and even magic markers.

Before switching mediums, David says, “In the 1950s, if he did one or two paintings a year, using the impasto painting technique, it felt good.

Fortunately, Murphy ended up being a very prolific artist, whose work was highly collectible during his lifetime. The Louisa Gould Gallery now offers a rare opportunity for admirers of the artist’s work to own a piece of the vineyard’s history.

The “Stan Murphy” exhibit will hang at the Louisa Gould Gallery, 54 Main St., through December 1. David Murphy will be on hand for a meet and greet at the gallery on Saturday, November 12.