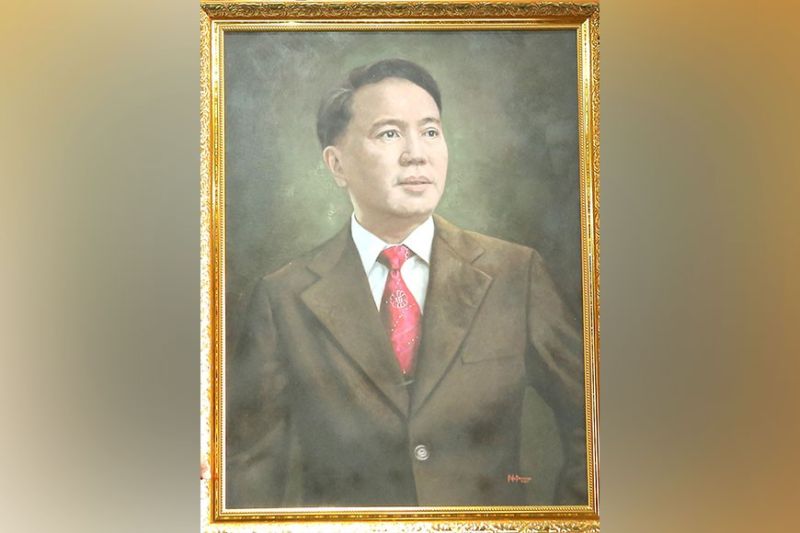 THE EAGLE IN OIL ON CANVAS. The portrait of LGC founder “Eagle” Levy P. Laus rendered by Edu Perreras. It will be part of the founder’s memorabilia collection which will be launched on Tuesday August 17 at the LPL Corporate Center on the occasion of his birthday. (photo added)

The “Eagle” of the Laus Group of Companies will forever burn in the hearts of the many people whose lives he touched with his kindness and love.

But now, as he will be remembered after joining his Maker on April 25, 2019, on his birthday on August 17, LausGroup founder Levy P. Laus hovers timelessly in oil on canvas, captured in a magnificent work of art by the renowned painter. Edu Perreras.

A gift from employees of the Laus group of companies, the Eagle portrait was presented to Laus group leaders and heirs Paul Laus and executive director Diorella Laus, general manager Alfie Adriano and Jeanette Capati.

It will be part of the Founder’s Memorabilia Collection, which will launch on Tuesday, August 17 at the LPL Corporate Center along the LausGroup complex located along Jose Abad Santos Avenue.

The painting enshrines Laus’ life, his vision, his mission and his strong advocacy for the development of the countryside, his love for Pampanga and his selfless service to his people, always reaching out to share his lifelong blessings.

Through brush and oil he becomes the eternal eagle in flight, exploring and exploring the heavens and beyond for every opportunity that will make life better for others and his countryside nest a bastion of development, a beacon of hope that shines forever and guides people of all races and creeds.

During his lifetime, Laus, the Eagle with colorful feathers and sharp eyes who seizes every uplifting opportunity, has been referred to as a magnate, statesman, civil servant and community volunteer.

Most importantly, he is a humanitarian, a man of action and a driving force as founder and CEO of the Laus Group of Companies, founder and President Emeritus of the Pampanga Chamber of Commerce and Industry, Inc., former head of the San Fernando Heritage Foundation, and the mind behind a host of non-governmental organizations that have kept Pampanga off the ground for the longest time. He was the wind under the wings of all the great defenders that Kapampangans and Filipinos across the country revere.

He looked at life in a continuum, not in stages, more concerned with the future than the past because that’s where the action and the challenge are, and that’s where he made his living. If success precedes meaning, then he is one of those who have definitely discovered the true meaning of success after giving up some of it.

For him, we do not comfort ourselves simply to be comforted but to comfort others. He worked hard to keep his multi-businesses open, not to mention growing, because so many people depended on him. It was a paternalism close to humanitarianism.

It was his pure love for Pampanga and the countryside that drove him passionately to serve his Kabalens. He was just a simple son of San Fernando, a typical “palengke” boy who sold raffles at the public market where he learned the basics of life. Even with the lure of better opportunities elsewhere, he opted to stay in Pampanga, starting small and overcoming challenge after challenge. Lessons were learned the hard way and he discovered that success had its price.

But audacity and a passion for taking risks also have their rewards, now shared by all. He always said that peace of mind is the root of happiness and contentment.

In its final flight, the Eagle, the humble servant of the time, left a legacy that will forever shine through the portrait as it soars in the celestial skies where it now rests peacefully. (JTD)

Use pastel colors for the eyes for a dreamy look | Beauty