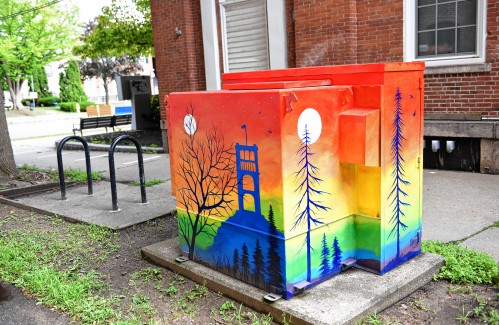 GREENFIELD — As part of a larger downtown revitalization effort, three local artists have used their creative talents to spruce up two transformer boxes and a generator.

According to Director of Community and Economic Development, MJ Adams, public art makes an important contribution to the experience of being downtown. She said city officials noticed the two transformer boxes and a large generator, all a short walk from City Hall, which were painted in drab colors, and decided to make them more interesting and visually appealing.

“When we need to have useful public facilities,” Adams explained, “we’d like to make them beautiful.”

The idea of ​​painting street objects that would otherwise fly under the radar is far from unprecedented in Greenfield. Previously, community members painted other electrical boxes and parking meters. Adams credits Recreation Director Christy Moore as the driving force behind this project.

In May, the city issued a call for local artists who wanted to “contribute to the vitality and attractiveness of the streetscape of the downtown Crossroads Cultural District”, with a key question: “How can we make people more interested in their community?” The final decision regarding artists and creations came from the Mayor’s office, alongside the Department of Community and Economic Development. Adams expressed satisfaction with the work of the artists – Maricella Obando Moya, Sarah Adam and Mary Chicoine – claiming the town ended up with three beautiful designs.

The largest of the painted objects is a generator located in the parking lot behind the town hall. This piece, painted by Maricella Obando Moya, is titled “The sweet flowing red mill”. Obando Moya describes the scene as a tribute to Greenfield farming, noting that when she thinks of Greenfield, she thinks of the many farms and barns in the surrounding countryside.

In addition, this generator contains an “Easter egg”, that is to say a small mailbox indicating to passers-by how to get to the town hall. Adams said she appreciates that detail.

Also near City Hall, next to the ramp, is a transformer box with artwork titled “Moonrise Over Greenfield”, which depicts the downtown skyline and the tower of the poet’s seat under a rainbow-painted night sky. The artist, Sarah Adam, said she wanted to create something involving landscapes and landmarks for Greenfield, but also wanted a calm landscape painted in the colors of Pride. She had noticed that in event photos taken before the transformer box was painted, it stood out against the colorful outdoor dining area nearby.

Regarding his creative process, Adam said, “I don’t know, I just have to paint.”

The third box is located on Fiske Avenue and, like part of Obando Moya’s box, is bee-focused. The artist, Mary Chicoine, is a lifelong naturalist with an interest in native plants and wildlife. His piece, “Bees for Life”, is inspired by Greenfield’s theme of the bee – which pays homage to Lorenzo Langstroth (1810-1895), an American beekeeper, clergyman and teacher considered the father of beekeeping. American.

Chicoine’s design was originally sketched at 8.5 inches by 11 inches to include all four sides, then enlarged to paint on the transformer housing. Chicoine said she was excited to add some beauty to the downtown area and wrote a message on the side of the box to encourage people to grow native plants.

Funding for the painting project comes from the Massachusetts Department of Transportation’s Streets and Shared Spaces Grant Program. The cost of the project, including artist stipends and material costs, was approximately $2,686, of which $2,050 went to stipends. The Shared Streets and Spaces program has also funded work on Court Square, as well as the reconstruction of the Pocket Park on Main Street and the layout of Greenfield’s outdoor restaurants. Adams said MassDOT recognizes — especially during the pandemic — that people need to be outdoors more, adding that it’s great the city has access to these resources.