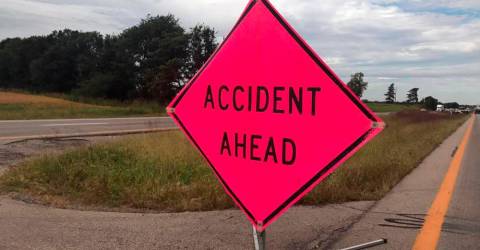 PETALING JAYA: A motorcyclist and his passenger miraculously got up and walked away despite hitting the side of an oil tanker in a freak accident along Jalan Puchong-Dengkil yesterday morning.

In the incident, which allegedly occurred at 8 a.m., the motorcyclist and his passenger were nearly killed after a canvas tarpaulin from a dump truck came loose, struck them and enveloped them.

Video of the incident which was captured by a dashcam from a passing car showed the truck traveling with the loose canvas cover on top of its dumpster slamming violently.

We then see the biker and his passenger driving behind the truck.

Moments later, the canvas tarp flies off the dumpster and grabs onto the bikers, causing them to lose control of their machine.

They veer left in the direction of an oil tanker, bump into its side, almost being knocked down before falling from their motorbike.

The runners are then seen getting up in the middle of other passing vehicles.

Selangor Police Traffic Investigations and Law Enforcement Chief Superintendent Azman Shari’at said no police report on the case had been received from either. either of the parties involved.

However, he said police opened an investigation after viewing the viral video and were trying to locate those involved.

Azman said police are also looking for help from the motorist who recorded the incident.