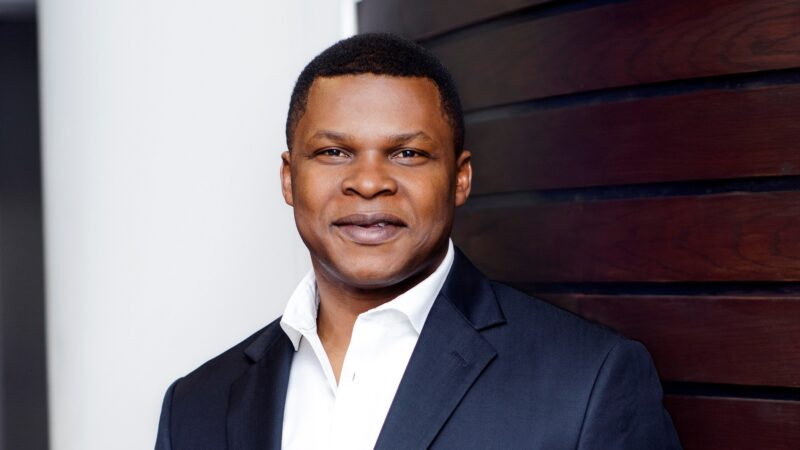 An oil and gas lobbyist and convicted fraudster has teamed up with the UN to mobilize private sector investment in energy development across Africa – including, controversially, fossil gas.

The Cameroonian-born lawyer describes himself on his website as “an internationally recognized thought leader, lawyer, thinker, speaker and entrepreneur, advising large corporations on corporate strategies with a focus on investing in Africa’s future”.

Behind Ayuk’s sleek appearance and gushing marketing fliers lies a murkier past.

Court documents seen by Climate Home News show Ayuk was convicted of fraud in the United States for impersonating a member of Congress. As part of his law firm Centurion Law Group, which brokers oil and gas deals across the continent, he was investigated for money laundering by the central bank of Ghana.

This did not prevent UN agencies from offering him a platform of choice to promote gas extraction in Africa during the Cop27 climate summit.

In 2007, Ayuk pleaded guilty to illegally using Congressman Donald Payne’s stationery and signature stamp to obtain U.S. visas for 11 people from Cameroon while an undergraduate student at the University of Maryland. He was sentenced to 18 months probation and expelled from the country.

In 2015, The Finder newspaper reported allegations that Ayuk was involved in laundering $2.5 million in Ghana and repatriating $1 million to Equatorial Guinea, where he lived. The director of the Centurion subsidiary in Ghana was arrested and detained during the investigation. GT Bank told investigators that Ayuk showed up at a branch with two bags containing $2.5 million in cash, to be deposited into a Centurion company account.

Ayuk reportedly told the bank that the funds were for legal fees related to Centurion’s operations in Ghana. The case seems to have stalled.

Climate Home contacted NJ Ayuk for comment but did not receive a response.

Earlier this year, the African Energy Chamber partnered with the United Nations Economic Commission for Africa (UNECA) and Sustainability Energy for All (SE4All) to create Team Energy Africa.

A brochure describes it as “an informal coalition of like-minded African investors and institutions willing to invest in and champion Africa’s energy transformation”.

The initiative aims to unlock $500 billion in private investment to deploy 250 GW of clean energy by 2030, bring electricity to 600 million Africans and spur economic development.

For the team, gas, of which there are significant reserves across the continent, has a role to play in eradicating fuel poverty. The leaders of Uneca and SE4All have both backed gas as a “transition fuel” from dirtier coal and oil to renewables.

“One conversation will be about gas. You have to go to the Cop27 to talk about it. We need a team with the private sector in the room,” Vera Songwe, who led Uneca until September, said of the initiative.

“Drill baby drill: this should be Africa’s message to the world. If you want to solve energy poverty, gas baby gas,” Ayuk told Africa Energy Week in South Africa last month. “We have to go to COP27, supporting our energy producers. We should not apologize for our energy sector.

In a commentary he posted from Sharm el-Sheikh, Ayuk argued that African governments “must push back against attempts by some global interest groups and financiers” to prevent the continent from developing its gas reserves.

“This leads us to believe that Africa cannot rely on international partners,” he said.

Oil and natural gas will play a permanent role in Africa’s energy mix for years to come. Renewables are expensive, unreliable, and can’t do the heavy lifting right now. We must drill for gas and end energy poverty while fighting climate change. #cop27egypt #COP27 pic.twitter.com/RYx8hssMvl

Photos of the presentation seen by Climate Home show that a “natural gas expert group” is planned alongside a “renewable energy expert group”.

The team will be crucial in “spurring private sector investment to drive the growth of Africa’s energy sector while ensuring that the continent does not continue to beg for funding from international parties,” Ayuk said. .

The event followed a scorecard to show how African energy investments are being used. It included gas projects in Senegal. Climate Home understands it is due to launch at the SE4All pavilion at Cop27 on Tuesday 15th November. A senior Uneca official told Climate Home that it was “a flagship initiative of Uneca”.

Jean-Paul Adam, climate director at Uneca, told Climate Home that the initiative is about “African investors channeling their own resources into investments across the continent.”

Uneca “is working with various private sector partners to support this initiative. These investments will be mainly focused on renewable energy,” he said.

Tracey Crowe, chief of staff and senior director of SE4All, told Climate Home: “We do not support any point of view that does not advocate a sustainable energy transition. We believe that a just energy transition is an opportunity to create jobs and economic growth towards a clean and prosperous future.

While proponents argue that Africa must use all the resources at its disposal to lift people out of energy poverty, critics warn that investing in fossil fuels is a risky gamble.

“Far from there the idea for the nations of the north of the world to tell the actors of the south of the world what to do with their assets. Whether it’s a good idea for economic reasons is another question,” said Kaya Axxelsson, research assistant at the Smith School at the University of Oxford. “In some places, it may not make sense to build new gas infrastructure that gets stuck and locks them into a cycle of debt, especially when renewables may be a cheaper and safer option.”

The majority of gas projects being developed on the continent are for export, not for alleviating energy poverty. European nations are looking for additional short-term supplies to replace Russian imports, but that demand may not last as they increase renewables.

The Don’t Gas Africa coalition is urging African leaders at COP27 to support wind and solar power instead.

“The African gas rush is sheer madness and will only further harm the climate of the people of Africa,” said Mohamed Adow, director of Power Shift Africa. “It is horrifying to see an African cop used to promote fossil fuels and exacerbate the climate suffering of Africans. What is particularly infuriating is that most of the proposed gas will be sent to be flared by Europeans.

Passages from the Mahabharata come to life on the web