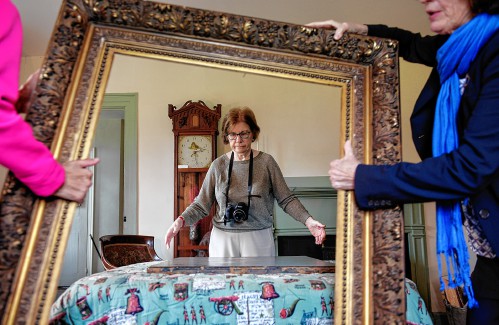 Hanover – As soon as the art expert finished inspecting the back of the canvas, Cynthia Bittinger and Betsy Gonnerman gently struggled against the heavy wooden frame standing on the blanket-covered table to reveal the 19th-century oil painting century of Daniel Webster, whose fame and importance stands even against the long list of famous and important alumni of Dartmouth College.

Knowing that dropping the recently donated portrait could lead to disastrous damage, they carefully laid the gold frame on its back, eager for the reviewer, Mary Jane Clark, to continue her work.

Clark’s report would determine how much insurance the Hanover Historical Society should purchase for the painting, but Bittinger was more interested in whether to learn more about the history of the company’s latest acquisition, including precisely when it was painted.

“Me being a curious person, I’ve done a lot of research in my life,” Bittinger said. “I contacted people to help me with this.”

Bittinger’s research and his network of contacts ranged from the archives of the Omni Parker House in Boston to the diaries of Webster’s wife on an overseas trip to France. A member of the Dunfey family, who owned the Parker House, donated the painting to the Historical Society’s Webster Cottage Museum, a 1780 farmhouse nestled on the Dartmouth campus along North Main Street, where Webster rented a room for a year before his 1801 graduation.

Bittinger quickly established with certainty that the painting was painted by Joseph Desire Court, a French artist whose work had been commissioned by Louis-Philippe d’Orléans, reigning King of France from 1830 to 1848.

“But I didn’t see how Daniel Webster and Joseph Desire Court could ever come together,” Bittinger said.

No one knows if Court met Webster, who was born in Salisbury, NH, in 1782, represented New Hampshire and Massachusetts in the United States House, was United States Senator from Massachusetts, ran for President in 1836 and was appointed Secretary of State by three different US Presidents before his death in 1852.

It is possible that Court, who died in 1865, used a portrait painted by someone else or took advantage of a new emerging technology: daguerreotypes, the first photographic process widely available to the public.

She hoped that Clark would confirm the authenticity of the painting (she had learned that Court’s other paintings sold for between $ 4,000 and $ 22,000) and perhaps give more clues as to the exact date of the painting.

“I’m not an authenticator,” Clark said, bending down to guide an ultraviolet penlight across the surface of the paint in an inch-by-inch seeking pattern. “But I’m looking for any signs that there is something eccentric or wrong, just red flags.”

Clark, 68, from Wilder, has been studying and working in the art world since the age of 20, including teaching art history in Dartmouth. Today she runs Art Care and Appraisals, a Norwich-based company, to perform appraisals.

“It brings together all the different skills and experiences, my teaching, my research, my time studying art history,” she said. “I have to take advantage of all the skills I have ever learned. It’s really something I couldn’t have done when I was 25.

In just a minute or two, Clark’s light revealed a faded patch of paint near the bottom of the paint, a vaguely finger-sized hourglass shape that is invisible to the naked eye.

“You can all see,” she said, shining light on the stain, indicating a difference in the paint’s chemical makeup. “It just screams attention. So there is an example where this painting has been retouched.

The stain is in the dark brown background of the paint.

“It’s a neutral background. It doesn’t really affect the paint much, ”Clark said. Cracks are common in oil paintings.

“One thing people don’t realize is that the oil takes a long time to dry,” Clark said. “It can take up to 50 years. ”

As she moved the board up, Clark noticed more signs of restoration, a multitude of discolorations scattered like raindrops around Webster’s face.

Although in a sensitive area, they were concentrated mostly in the darker shadows of Webster’s image – the sideburns, the collar, the spots where the dark hollows of his eye sockets blend into his thick black eyebrows. Clark said they were sparse enough that they didn’t seriously affect the value of the painting.

Daniel Webster’s paintings are not uncommon in Dartmouth. He posed for many such portraits during his illustrious career as a lawyer and statesman.

“He was so full of himself, you know,” Bittinger said. “Dartmouth has so many portraits of Daniel Webster it’s amazing. … But the quality of it is quite high.

The Hood Museum of Art once assembled dozens of Webster’s paintings from its collections into one exhibit, and today the 1953 Commons classroom (formerly known as Thayer Dining Hall) is dominated by a large painting by Webster arguing in the United States Supreme Court in what is known as the Dartmouth College Case.

The painting is captioned with a quote which has become famous both for the man and for the college: “It is, sir, as I said, a small college, and yet there are those who love it. . ”

In that case, a landmark corporate law decision, the Supreme Court ruled that Dartmouth could not be compelled by the New Hampshire legislature to become a public institution.

Bittinger and Gonnerman, the treasurer of the historical society, began to put the image back on his face, grabbing the frame and applying upward pressure.

Suddenly the frame leapt a few inches into the air above the table, leaving the heavy canvas to the surface and eliciting soft cries of horror from the three women.

Bittinger and Gonnerman stood still, frozen, for a moment, until Clark ordered them to lift the frame to keep his nails from damaging the canvas.

“It needs to be resettled,” she said.

Although they decided not to remove the image from its frame for fear of damaging the canvas, once it came out it turned out to be a happy accident, with no visible damage to the canvas.

“You’re lucky that didn’t happen when it was on the wall,” Clark said, soon pointing to weak support as the culprit.

And then, with the executive out of the way, Clark was able to learn more. She spent minutes scanning the corners and sides of the canvas, trying to make sense of what she was seeing.

“There is cardboard,” she said. “A spacer, put there to be a good fit.”

She quickly determined that it was made from Masonite, a substance that was not widely produced until 1929.

“So it wasn’t just touched up, but I think the canvas itself was put back on a board,” she said.

Bittinger said she hoped to use Clark’s final report to help narrow the possible date range of the painting’s creation.

Hours later, Bittinger reported that Patrick Dunfey, head of exhibitions, design and planning at the Hood Museum of Art (and cousin of the painting’s donor), had to crop the image in time for it to be placed. on the wall during Webster. Next Cottage visiting hours, from 2:30 p.m. to 4:30 p.m. on Wednesdays.