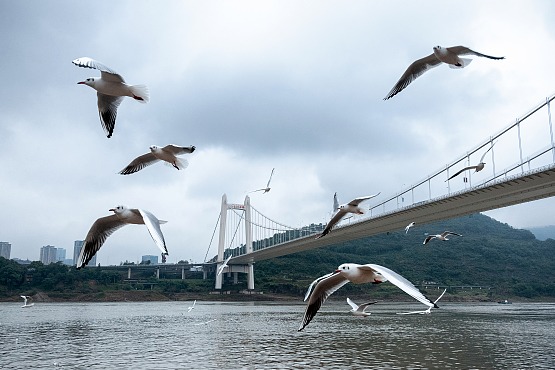 In good weather, Wang Lifeng often shoots videos and watches finless porpoises from a unique viewing platform, which was once a wharf used to transport oil for the Wangjiahe Oil Depot, where Wang once worked.

The wharf was demolished because it was located in the Chinese sturgeon reserve in the city of Yichang, in the province of Hubei (central China). After losing its oil source, the Wangjiahe Oil Depot, built over 60 years ago, was closed. A new oil depot has been built by Sinopec more than 60 kilometers away in the city of Zhijiang to replace the disused Wangjiahe site.

When she heard the news that the Wangjiahe Oil Depot was closed, Wang was initially hesitant to go to work in Zhijiang, as she had a unique attachment to the old oil depot.

“After all, I’ve worked here for a long time,” Wang said.

Officials from the Yichang branch of Sinopec talked to the employees to help them realize the importance of demolishing the wharf and moving the oil depot. Wang and his colleagues understood the need to protect their mother river, which benefits current and future generations.

On April 8 last year, the wharf was demolished, but part remained and was turned into a finless porpoise viewing platform, as well as an educational base for Yangtze River conservation. .

“We cannot just dismantle it and erase the city’s memory. We must both protect the environment and educate future generations,” said Xiao Anhua, head of Sinopec’s Hubei Yichang branch.

Now the viewing platform has become famous online and locals like to take photos and videos here. “The wharf and barges have caused some degree of damage to the Yangtze River during oil transportation. Now, looking at the clear water and lush greenery along the Yangtze, I feel like I have made a concrete contribution to protecting our mother river,” Wang said.

“Since the wharf was demolished, the number of finless porpoises that usually live here has increased to five, and the Chinese sturgeon’s migration route has been simplified,” said Wu Yupu, head of the nature reserve management office. Chinese sturgeons in Yichang.

The relocation of the Wangjiahe Oil Depot and the transformation of its wharf illustrate people’s efforts to protect the Yangtze River.

According to Jing Yajun of Sinopec’s Hubei Oil Branch.

Battelle's mobile platform can break down 'eternal chemicals' in wastewater