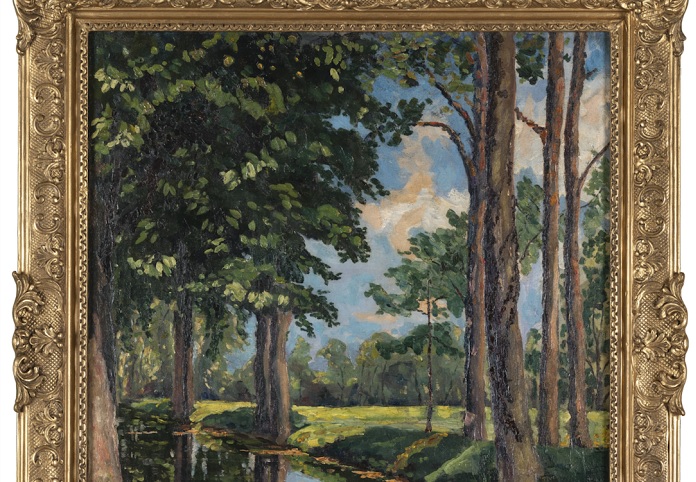 An oil painting created by Winston Churchill in 1921 – believed to have been lost to the world after the British statesman gave it to Aristotle Onassis – will soon be up for auction.

The longtime British Prime Minister, who was a renowned writer and historian as well as a painter in his spare time, had once gifted the painting, known as ‘The Ditch, Breccles’, to the Greek magnate, who had hung on the walls of his luxury yacht, the “Christina”.

Oil was one of Churchill’s earliest works; he even mentioned it in an essay called “Painting as a Pastime,” which he wrote in 1921 and which he had published in Strand Magazine.

Onassis’ heirs consist mainly of his granddaughter Athina, who has no children. She is the daughter of Aristotle Onassis’ only surviving child, Christina.

The painting will be auctioned off by Phillips at an event featuring modern and contemporary art on June 23 in New York City. It is expected to fetch a price of between $ 1.5 million and $ 2 million.

The iconic British statesman and great mathematician had met Onassis through Churchill’s son Randolph. They then spent a lot of time together, including long trips on Onassis’ yacht, where Churchill regaled guests with tales from his life, as he drank whiskey and smoked his ubiquitous cigars.

The Greek tycoon was one of Churchill’s many friends who were the lucky recipients of his oil paintings, which were mostly landscapes and still lifes.

The British Prime Minister’s works have generated great interest in the art market over the years, with one buyer purchasing three of his paintings for a staggering total of £ 11.2million ($ 16million).

Among those oils was a painting of a North African mosque, sold by actress Angelina Jolie, which was three times its estimated price, making £ 8.3million ($ 11.6million), a record for Churchill’s paintings.

The previous record for the Prime Minister’s work was $ 2.7 million, for a canvas titled “The Goldfish Pool at Chartwell”, which he painted in 1932. This work was sold in 2014 at Sotheby’s in London .

The Phillips auction house plans to display “The Moat, Breccles”, alongside a replica of the bar of Christina, the yacht which has seen guests such as John D. Rockefeller, Eva Peron, Richard Burton, Elizabeth Taylor and Marilyn Monroe, among many others.

The work will be on display from June 15 at the new headquarters of the Park Avenue auction house in New York.

Onassis had purchased the Christina, later nicknamed the “Christina O”, which was originally built as an armored personnel carrier in 1943, for $ 34,000 in 1954. It made extensive and expensive renovations and has been working on it. organized gala evenings in the late 1950s.

Princess Grace and Prince Rainier’s wedding reception in 1956 took place on the yacht.

Onassis ‘famous love affair with opera singer Maria Callas took place on board in 1968, as well as Onassis’ affair with Jackie Kennedy, President Kennedy’s widow. The couple got married on Christina O near Skorpios, the private island of Onassis.

The yacht was given to Onassis’ daughter Christina after her death in her will in 1975. Christina bequeathed it to the Greek government as a presidential yacht.

Over 20 years later, the Christina O was substantially refurbished and finally restored to its former glory in 2001. The ship is 325 feet (99 meters) long; its crew is composed of 35 people and it can accommodate 36 guests in the 18 cabins and the Onassis suite.

A library, sports lounge, children’s playroom, fitness center, beauty salon, massage room and jacuzzi are included in the onboard facilities. It can now be rented by those who wish to share its glamorous past and enjoy its unparalleled amenities.

Why use pastel, part 16a